The very first thing you will notice about me is my close resemblance to the bobcat. Apart from having the same alert stance that’s seemingly always ready to pounce, my general appearance also shares a few key similarities with my wild cousin.

Akin to the bobcat, my head somewhat looks like an inverted pear that is highlighted with strong features. Now while my cheeks and chin tend to be rather bushy, you can easily see their outlines at a glance. Interestingly, my head can be so hairy that many cat fanciers say I even sport sideburns!

I’ve got almond-shaped eyes that are framed by shaggy eyebrows. Apart from being large and expressive, they also have a slight slant to them that gives me an ever curious look. My eyes are commonly brown and gold, but most cat registries also accept gooseberry green as a recognized eye color of my breed.

My body is prominently buff and well-developed. I have shoulders that stick out and legs that are stocky yet still look athletic.

Unlike other felines that have oval paws, mine are nearly round. By the way, did you know that I am also one of the breeds that are polydactyl? That sounds a bit dinosaur-y, but it just means I come with extra toes. 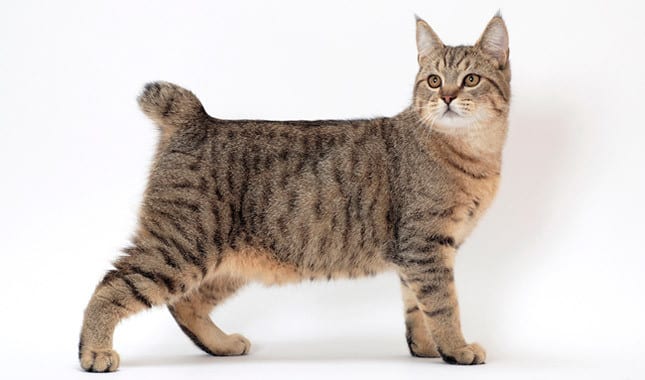 I have a coat that can be either short or long in length. Although it has a silky appearance, you’ll be surprised to find that it has a rigid feel to it when stroked.

My coat usually comes in brown spotted tabby, but I can also sport a ticked, ruddy or tortoiseshell one.

Last but certainly not least, I flaunt a tail that you’re sure to find rather striking.

Aside from being only a couple of inches long, it’s sort of knotted or kinky looking. And ‘though it may not be that long, it’s just as springy and flexible as they come!

Now while I may have the appearance of a wild cat, my attitude is as domestic as it gets. I am a feline that is known for my extreme sociability and friendliness. Besides easily establishing a close relationship with my human companions and their loved ones, I also don’t find it tough to get along with other pets. 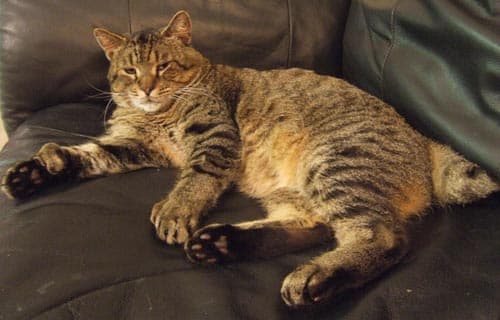 I am considered as one of the most patient felines in the world of cat fancy.

Unlike other breeds that tend to get restless and cranky when they don’t get what they want when they want it, I don’t have a problem staying cool even when things don’t go my way.

This is the reason why I am ideal for enthusiasts just starting out in cat fancy as well as seniors looking for a companion feline. Parents with young children also won’t have a problem having me around since I am very tolerant with babies. Besides happily engaging them in play, I will also allow them to handle and pick me up without a fuss.

I am a fairly smart cat and can easily master tricks as well as remember commands if consistently trained. I have a penchant for toys that tease my brain and I appreciate solving a puzzle or two to while away the time. I also like toys that allow me to show off my litheness and agility like laser pointers and rods with pieces of cloth tied at the end.

Unlike most cats, I also don’t mind wearing a leash and I’ll even be game to go for a walk with my humans, as long as the weather’s nice. I simply love to socialize and won’t pass up a chance to mingle with other people and animals, especially other felines and cat-friendly dogs.

You will also notice that I tend to be more talkative compared to other cats. However, instead of hearing me break into a sudden caterwaul, I usually like to express myself by using a variety of chitters, chirps and purrs. Of course, I also let out a few growls from time to time just to mix things up.

I am a feline that first time cat owners and older fanciers won’t find hard to handle. Unlike other breeds that can be rather high-maintenance, I am a cat that is pretty much easy to live with and take care of. Moreover, I don’t have any special dietary requirements you need to keep in mind.

Akin to other cats, I still need careful grooming at least every week to keep my coat looking nice as well as prevent it from getting extra kinky and matted. An occasional check-up with the cat doctor is a good idea, too.

But that’s about all. I told you I’m low maintenance.

Just to set things straight, it isn’t true that my breed originated from the accidental pairing of a wild bobcat and a domestic cat. Despite my wildcat looks, findings by cat geneticists show that I actually descended from domestic lines. So no wild ancestors for me.

What really happened was an avid fancier by the name of Carol Ann Brewer purchased a tomcat from a couple living in Washington State in 1985. She decided to buy the feline because apart from having a stubby tail and a uniquely spotted coat, the tomcat also had one very interesting physical attribute: he had extra toes on his paws.

Brewer loved the look so much that she didn’t think twice about adopting another young tom the following year that also sported a similar short tail. When he became of age, he paired with a neighbor’s female cat and produced a litter that mostly flaunted tails just like his. 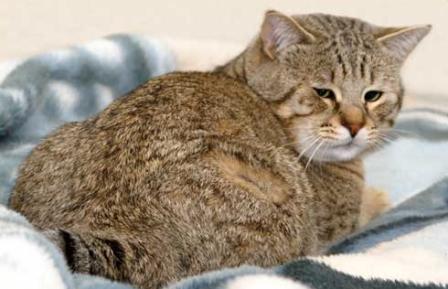 Out of the litter, Brewer picked a short-tailed female kitten that she named Pixie, which had a bushy coat with a reddish brown tinge. Right then and there, Brewer decided to produce more cats just like Pixie and set up an experimental breeding program soon after she matured sometime in 1993.

The breeding program turned out to be a complete success and Brewer produced several kittens that had tails similar to Pixie’s. Brewer also knew that she may be on the verge of establishing a new breed of cats, so she consulted the officials of The International Cat Association (TICA).

Brewer eventually applied for a New Breed status for her felines in 1994. She chose the name “Pixie bob” as a tribute to the matriarch of the breed and as a nod to our close resemblance to the red bobcat. TICA granted the Pixie bob our Exhibition status the following year and our breed was awarded its Championship status in 1997.

How to Keep Me Healthy and Happy pixie bob health

To tell you the truth, I am not a cat that’s difficult to take care of. Unlike other felines that have special dietary requirements and grooming needs, I can be easily kept healthy and happy even by newbies and seniors.

I just need to load up on healthy food – that means protein – as well as a weekly grooming regimen and I’m good to go.

I am a feline that won’t hesitate to show off my high-flying skills when given the chance and getting your hands on this wonderfully automated string toy is one smart way to encourage me to do just that.

I have a thing for chasing things and this Go Cat Cat Catcher Teaser Wand with Mouse Cat Toy gets me moving each and every time. Apart from being handcrafted and made with a braided flexible wire and glitter wand combo for extra durability, this toy also features a striking stuffed mouse? that never fails to arouse my hunting instinct.

Being naturally inquisitive, I like to get my paws on puzzle toys that get my mind working in overdrive. And this Interactive Treat Maze & Puzzle Game for Cats just fits the bill. With three varying levels of difficulty, this toy is definitely going to give my brain a workout. And the best part – it automatically rewards me with my favorite treat when I complete a level successfully. As it should.

This is the funniest looking cat! I love it’s name too ?

haha, yes, ‘though it’s pretty cool how a cat could look so rugged and so adorable at the same time – and its name summarizes that quite purrfectly 🙂

Do you have any kittens that will become available? Scott

Are you going to have any kittens available? Would like information,I look forward to hearing from you.

Love,love,love mine. I have had her for 17 years. She is wonderful. She had two litters were she had the silver, bronze and the rare caramel color.