My name is perfectly descriptive of my looks: exotic, fierce and wild.

I sport a coat that really stands out when compared to other pedigreed domestic breeds. Apart from flaunting striking bold spots that can be elongated, oval or round, it also features a few prominent bands and stripes that take my exotic look up a notch.

The combination of these stripes and spots give me the appearance of a feline born to roam the Savannah rather than lounge on the sofa.

My face is also as exotic as they come – small, heart-shaped and framed by large, tall ears that stick high up on my head. They closely resemble the ears of my Serval ancestors.

As for my eyes, they are shaped like almonds and are set direcly under a brow that looks slightly hooded. To complete the wildcat look, my eyes have tear stain markings on them that run up to the edges of my nose.

In case you’re wondering how a domestic feline gets looks like these, well, I’ve got African Serval in my blood. Don’t be frightened, though – despite my wildcat looks, I’m as domesticated as they come. 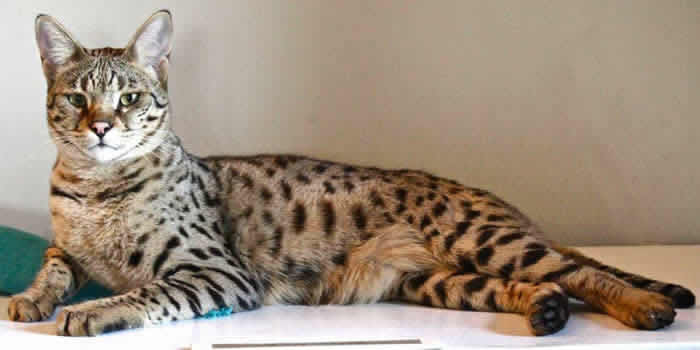 Even my body isn’t as intimidating as it first appears. I’ve got an elongated body and long, limber legs, but if you look closer, you’ll find I’m not much bigger than any other large domestic cat breeds. I simply look stockier and more thickset because my gracefully long neck makes my chest look bulkier than it actually is.

Sure, I may look like a wild cat, but I am easily one of the friendliest and most affectionate cats. Ever. Once we’re friends, expect to be showered with little gestures of affection on a daily basis, be it gentle bumps with my head or light pats with my paws.

If you’re feeling a bit under the weather, you can be sure I’ll notice and reach out to give you a reassuring hug.

But I’m not all sweetness and syrup – I am also one of the most active felines you will ever meet. I spend most of my day playing, climbing as well as exploring every nook and cranny of my home.

How exploratory am I

Let’s just say that if there was a list of the most curious cats in the world, I’d be at the top. I am extremely inquisitive and like to nosy in on everything that is happening in and around the house. Especially if it involves my humans.

Yes, that means I am going to follow you 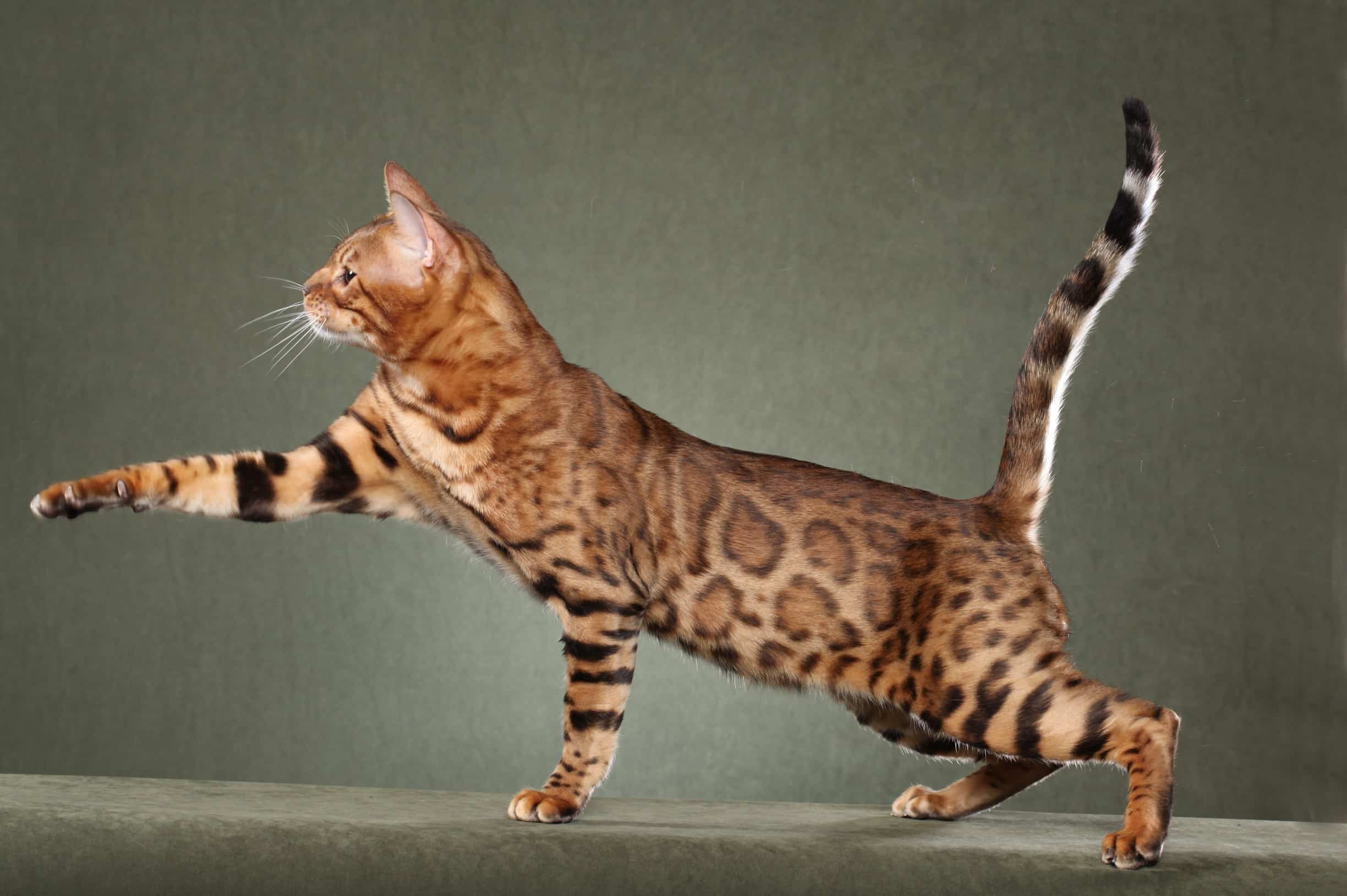 everywhere you go. So don’t be surprised when I barge into the bathroom while you’re taking a shower or jump into bed with you when your day is through.

As for when you’re not around, I’ll be keeping busy my favorite way. Did I mention that I’m a totally hardcore climbing buff

And when it comes to clambering up high spots, higher is always the better. It’s not uncommon to see me scaling up bookshelves, curtains and cabinets whenever I get in the mood for climbing.

And just in case you didn’t know, I am a feline that can jump up to 8 feet without even trying.

But that’s not all – on top of my extreme athleticism, I’m also a very smart cat. Did you know that learning basic to intermediate tricks for me is a walk in the park? I can easily remember commands and won’t have difficulty mastering tricks that are normally taught to dogs like fetch and sit. Interestingly, I can even be taught to wear a leash and am up to go for a stroll through the neighborhood as long as the weather’s nice.

My intelligence means that when I’m not climbing and exploring, I’ll want stimulation from activities that encourage me to think. As such, I’ve got a fondness for toys that allow me to use my smarts – especially if they reward me with a treat.

Now, I know what you’re thinking – beautiful, athletic and smart? Yes I’m quite the package.

But before you decide we’re the purrfect match, there’s something you should know.

You see, I am very demanding when it comes to attention and I can easily become anxious and restless if I feel my guardians have left me alone for too long.

This is the reason why I can be quite difficult to take care of by first time cat owners and seniors looking for a companion feline. I never seem to run out of energy and I demand lots of love and patience. If you can handle that, we’re going to get along great.

Before you decide to have me as an addition to your family, please take note that I am a cat that needs a lot of patience and dedication to live with. I need extreme amounts of attention and won’t hesitate to show my displeasure if I feel that my human companions are neglecting me.

I can also do antics that can become annoying over time if I do not get the attention I think I deserve. This is why I am not an ideal breed for newbies still learning the ropes or seniors looking for a companion cat. You should be at least an intermediate fancier to start with and extremely tolerant.

Yes, I know, I may sound like a problem cat, but rest assured that the experience of having me around is definitely worth it.

A cat fancier and breeder by the name of Judee Frank experimentally paired Ernie, a hefty 30-pound African Serval owned by Suzy Wood, to her rather lightweight 8-pound Siamese Sealpoint molly in 1986.

Now while there are speculations that Frank began the breeding program as a study in genetics, particularly to learn if one common disease from one cat breed can jump to another, it is still unclear whether that was her only intention for this rather strange breeding experiment.

Well, whatever her intentions, the experimental breeding program produced a striking female kitten that exhibited Serval-like physical characteristics, but still mostly retained the temperament of a domestic cat. She was named “Savannah” as a nod to the grasslands in Africa where her Serval lineage originated from. Savannah became the very first generation hybrid cross or “F1” on record.

Suzy Wood loved Savannah’s exotic looks so much that she decided to breed the Serval-hybrid when she became of age, which resulted in kittens that still had the same bold wildcat stripes and spots. These kittens were second generation hybrid cross or “F2.”

In 1989, another cat fancier and breeder named Patrick Kelley heard about Savannah’s kittens and decided to purchase one for the purpose of establishing a new breed. He also enlisted Joyce Sroufe, a fellow breeder, to help him in his efforts.

Although there aren’t any detailed description of their exact breeding program, Kelley and Sroufe were said to pair Savannah’s kitten with domestic felines of varying pedigrees like Domestic Shorthairs, Oriental Shorthairs, Ocicats and Egyptian Maus to produce the modern look of the breed. They also wrote the Savannah breed standard together in 1996 to get us recognized by national cat registries.

Kelley and Sroufe’s efforts came into fruition in 2001 when The International Cat Association (TICA) accepted the Savannah as an experimental breed and was awarded us with the Advanced New Breed Class recognition soon after. As for the rest, our just received its Championship status around two years ago.

How to Keep Me Healthy and Happy savannah cat health

Despite my wildcat looks, taking care of me is pretty similar to rearing any other domesticated feline. I only look different – I’m still 100% house cat.

That means I have the same diet and grooming needs, as well as the same desire for a tidy litterbox and a few toys to play around with.

However, due to my Serval lineage, I can have a liver that is smaller than usual, significantly reducing my ability to properly metabolize certain anesthetics like ketamine. It’d be great if you could monitor this with the cat doctor just in case I ever need to undergo any sort of surgery.

Also, please make it a point to steer clear of cat food that contains grains, especially corn, when stocking up my pantry. It can lessen my body’s ability to produce taurine, which can result in a few health issues sooner or later.

Oh, and like so many domestic cats – I am prone to obesity. So please be mindful of how much you feed me as well as my exercise habits.

I am a cat that simply loves clambering up high spots in and around the home. Apart from possibly causing a racket, I may also nick a few pieces of furniture while at it. So why not get your hands on this Go Pet Club Cat Tree Furniture to fulfill my need for climbing while keeping your furnishings safe from nicks and scratches? Win win for the both of us.

I have a penchant for toys that get my brain working on overdrive, such as this SmartCat 3833 Peek-a-Prize Pet Toy Box. Besides being made from extra durable materials, it also has compartments where you can hide treats and catnip for me to win. 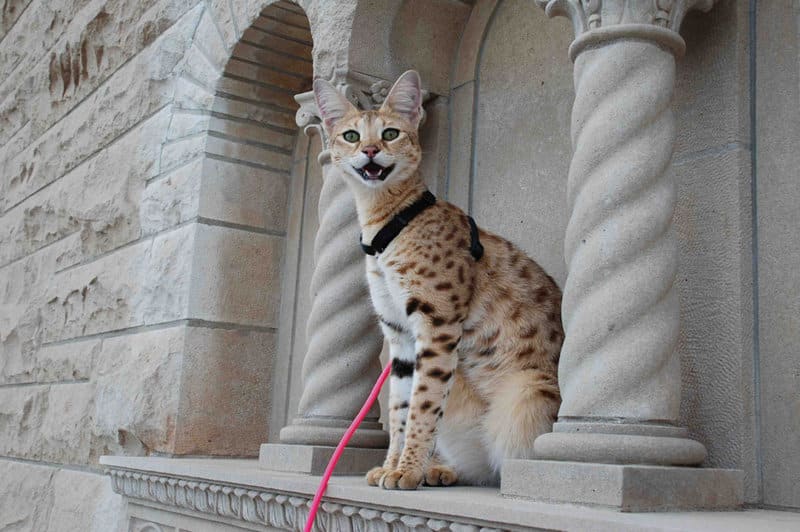 Unlike other cats, I am a feline that won’t protest when fitted with a harness or a leash for walking like this Petsafe Come With Me Kitty Harness and Bungee Leash.

This one doesn’t just have a sternum slide that can be easily adjusted to ensure a perfect fit, but it’s also made from durable nylon that won’t get frayed no matter how rigorous our walks might be.

I’ve never wanted anything in the world more than I want this cat right now.

Ah, yes. Savannah cats. My friend is currently raising one, and I am very interested in one too!

I have a Savannah kitten and she is such a mush! Your article is very knowledgable and is definitely correct!! My little girl follows me everywhere I go and is always getting into trouble!!

Where can I find one?

I’m getting one of these cats 😉

Lucky you 🙂 Keep up posted!

Spot on description – so loving as a breed but they are demanding! I was late getting out of bed to get breakfast the other day, so they kicked my bedside water over to get my attention. That said, savannahs are the ultimate cat in my opinion

Hahahaha, that’s so Savannah! Keep lids on everything spill-able and don’t buy breakables when living with these felines 😉

They look gorgeous, I wonder if one would get along with my Rat Terrier? High energy, high hunting drive, high play drive… They would keep eachother busy all the time!

Isn’t that third picture a Bengal?

Are they territorial? I was told they can attack people if they don’t like them. And will automatically start to hunt when they go out side. Would like to own one eventually but want to do as much research as possible.

My grandma used to have a savannah cat but he died of cancer last year.