The Burmilla cat is a cross between the the Chinchilla Persian and Burmese. The breed is rather rare and originated in the United Kingdom in 1981 (accidentally). The Burmilla is a loyal, devoted and friendly feline inheriting the best traits from both it’s parents. 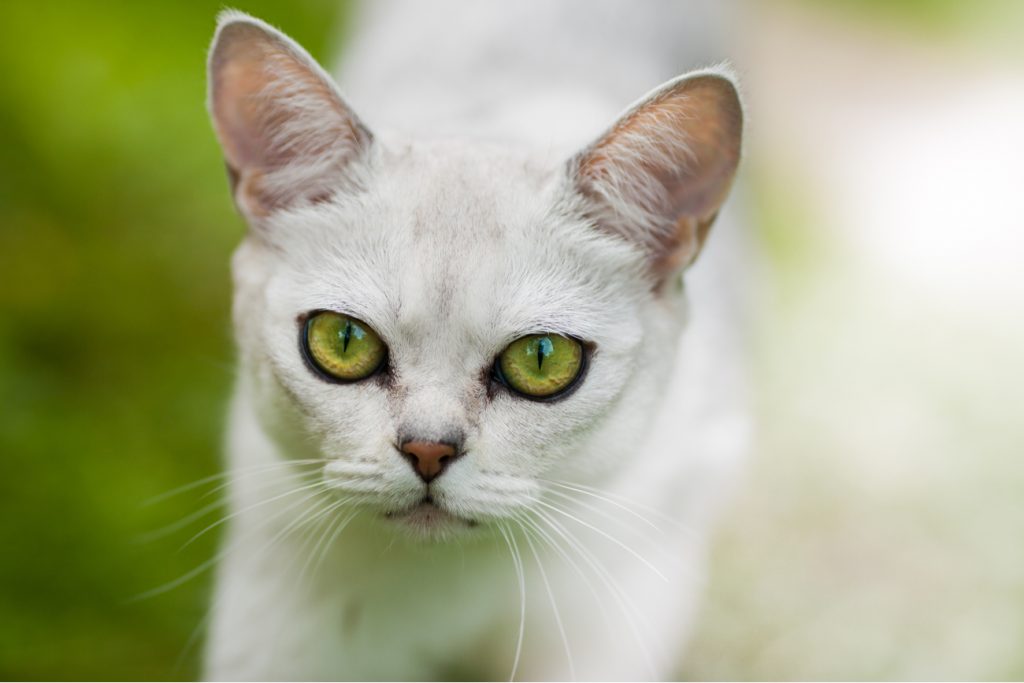 Breed: Burmilla cat
Size: Medium, 6 to 12 lbs
Energy Level: 3/5
Talkative: 3/5
Coat: Short to long, fairly smooth and silky
Hypoallergenic: No
Seeking: As easy-going as I am, I get on with anyone!
Child Friendly: Yes
Personality Snapshot: Fun-loving and playful but gentle and laid-back, highly sociable yet independent, loves high places but tends to be clumsy.

I am a visually stunning feline who’s well-known in the world of cat fancy for my changing eye color as I grow older.

While my eyes start out as light yellow or greenish gold when I am still a kitten, they gradually take on a more prominent jade green shade as I reach maturity. Some of us even have eyes that are as blue as the ocean.

And apart from the striking color – whether luminous jade or brilliant blue – my walnut-shaped eyes are also framed by an intense dark outline that makes me look like I’m wearing eyeliner. 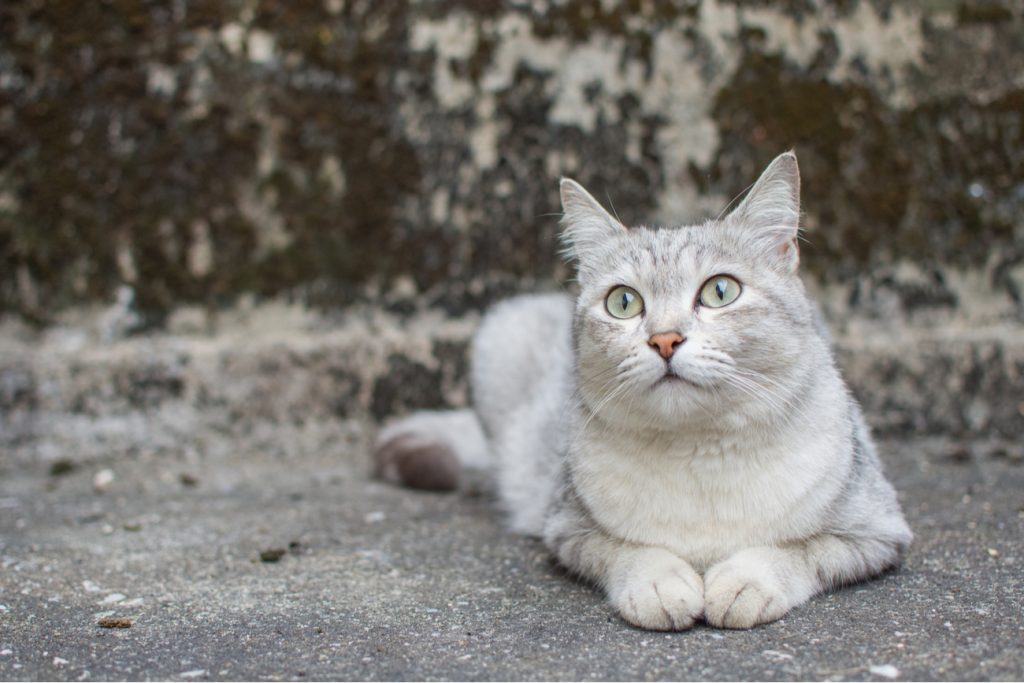 It may be a well-known cat fact that most felines don’t have eyelashes but a quick look at my well-defined eyes may well have you confused.
This charcoal lining combined with the subtle slant of my eyes gives me a sophisticated appearance, which is heightened by my distinctive sparkling silver coat.

Besides sporting a number of hues, one remarkable attribute my coat has is its characteristic shading that can be anywhere from faint to dark. Dedicated enthusiasts refer to my different shadings as smoke, shaded and tipped, depending on the intensity.

I’ve also got nose leather and paw pads that correspond to the color of my coat. My lilac and blue-coated relatives have pink paw pads, while those that are solid brown have brown ones. My chocolate kin have brown-black paw pads and those that have solid black coats flaunt black ones. 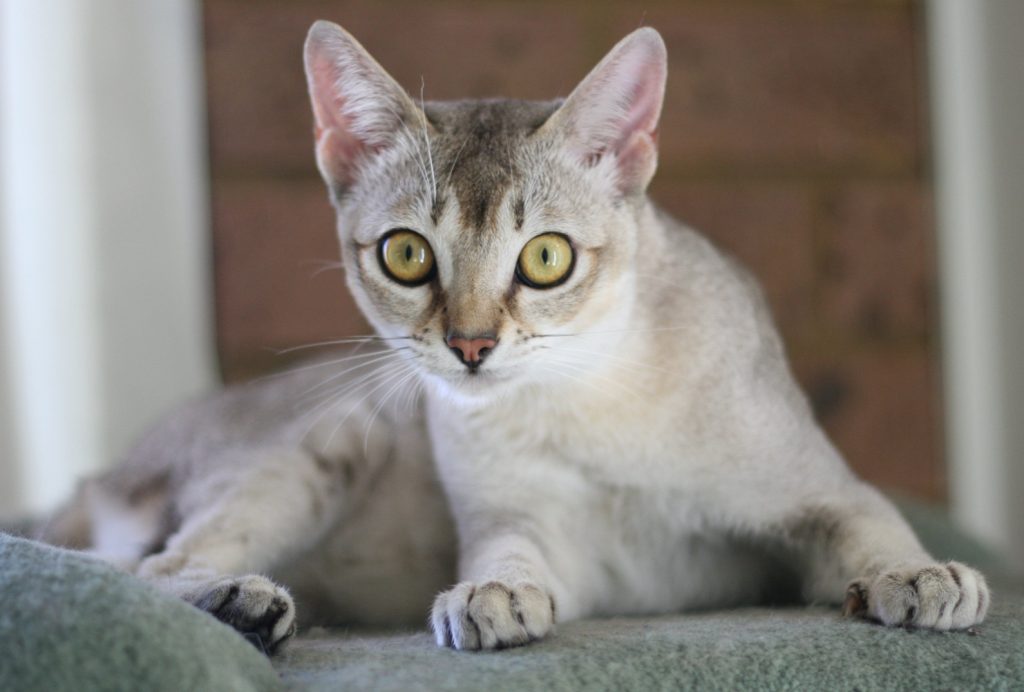 I get my good looks – and much of my personality – from two exceptional cat breeds: the playful and mischievous Burmese and the laid back and affectionate Chinchilla Persian, which makes me the purrfect mix of the two temperaments.

I’m fun-loving, yet very quiet and gentle. Fanciers describe me as a sweet-natured feline that’s very affectionate and people-oriented. I always make it a point to give my humans a loving gesture or two and it’s not uncommon to see me curling up with my human companions between the sheets or perhaps settling in their laps when they’re relaxing on the sofa. 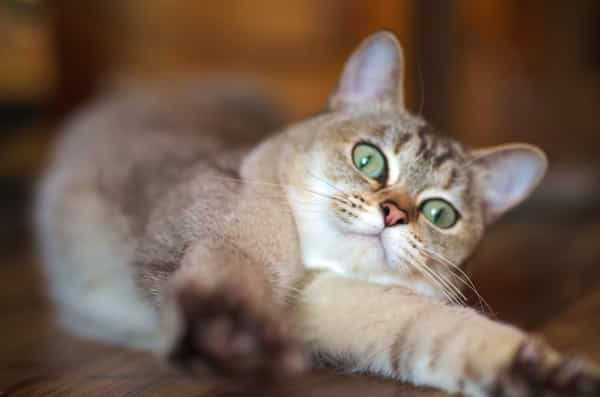 And while I am fond of chilling out, I’m also not the sort to spend my day lazing around. I am actually a very energetic feline and you’ll often seen me engaged in active games of my own making. I believe I got this zippy attitude from my Burmese side of the family.

I’m an avid climber and won’t think twice about scaling whatever high spot in and around the home that catches my fancy.

Although I can easily reach the places that I want to be on top of, I am not as careful compared to other felines and can easily topple stuff during my acrobatic feats. 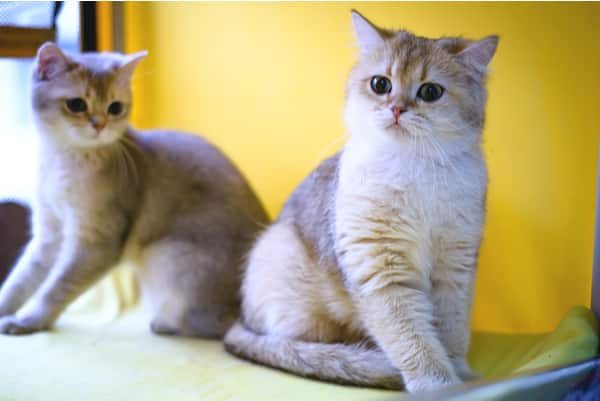 So if you plan to have me around, you’ll have to take some caution to make sure your breakables remain unbroken.

But that’s about all the trouble I’ll cause.

You see, I’m not a chatty cat and unless it’s really important, you won’t hear a peep from me. I also tend to be quite obedient – as far as felines go – and I’ll take your advice when you tell me not to do something. It’s just not like me to hold a grudge.

I’m one easy feline to take care of. Easy-going and undemanding, I’m ideal for newbie cat owners as well as older cat lovers looking for a gentle, affectionate feline companion. I am also very patient and tolerant around young children.

‘Though I can be very energetic at times, rearing and keeping me under control is a piece of cake!

Granny Burmy lovingly shares that our breed is purely accidental. It all started in 1981 when a cat breeder by the name of Miranda Bickford-Smith brought home a Chinchilla tom (he’s called Jemari Sanquist, by the way) as a present for her husband.

The story goes that just a few months before Jemari Sanquist was scheduled for neutering, a cleaning lady forgot to close the door of the study where a beautiful Lilac European Burmese molly named Bambino Lilac Faberge was lounging around.

When Bickford-Smith went to check on Bambino Lilac Faberge, she noticed the Chinchilla tom was also in the same room hanging out near the windowsill. Although she didn’t catch them in the act, the cat breeder had the gut feeling that the two had mated.

And she was right because the Lilac European Burmese molly gave birth to four female kittens on September 11th of that year. Much to Miranda Bickford-Smith’s surprise, the litter Bambino produced had a very striking appearance, which inspired her to set up an experimental breeding program with them when the kittens became of age.

She called the juvenile breed Burmilla as a portmanteau of the names “Burmese” and “Chinchilla.”

The standards for our breed were put together in 1984 and Britain’s Governing Council of the Cat Fancy (GCCF) granted our very own Championship status in 1995. We were also subsequently accepted in the roster of the Federation Internationale Feline (FIFe) short after.

In February 2011, our breed officially earned the Miscellaneous Class of the Cat Fanciers Association (CFA).

I am a generally robust feline and not as vulnerable to health issues compared to other cats. I require only minimal grooming as well.

There’s just one thing you need to keep in mind though – regular visits to the vet are a must since I can still be prone to kidney problems and allergies like other breeds if my health is not closely monitored by a cat doctor at least every 4 months or so.