Balinese and Javanese are longhaired cats in the Oriental family. Despite the name, the breed isn’t of Asian descent. They’re from the USA. A vocal, fun loving and highly intelligent breed with similar qualities to the Siamese, also known for being a rather emotionally high maintenance breed of cat. 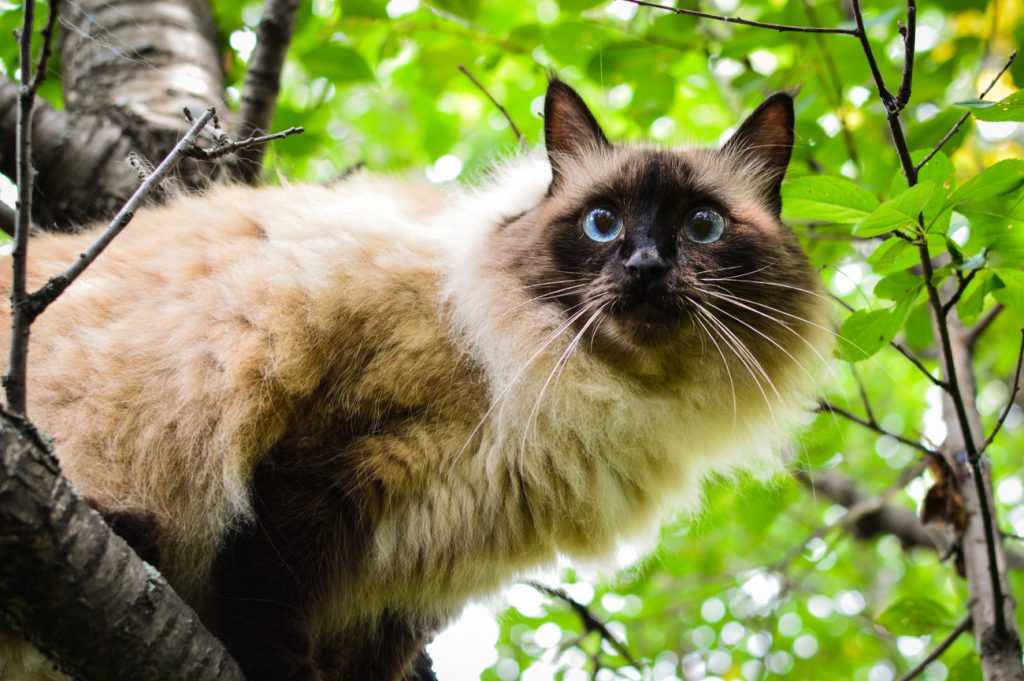 People always tell me I’ve got a regal look. Unlike other cats, my head is neither square nor round, but tapers down to a triangular shape that gives me an air of majesty.

To top it off, I have almond-shaped eyes with a slight Oriental slant and eyes of the bluest blue, like the deepest part of the ocean.

To further intensify my aristocratic appearance, I have a straight nose that does not break or rise. It really accentuates the shape of my head and gives me an inquisitive look, too, which is right on point with my personality.

You see, I’m a super curious cat and as if to further highlight my nosy disposition, I have large, pointy ears that stick out on top of my head like antennas.

But the best thing about me has to be my elegant, willowy body. That’s the inspiration for the name of my breed, you know. That is why I’m named the Balinese – after the graceful dancers of the island of Bali – even ‘though I’m actually from the States (shhh, don’t tell anyone).

Covering my svelte figure is a long, fine coat that has the appearance of excellent silk. Is it any wonder I look so regal

I really, really love my humans. I always want the best for you, which is why I dedicate so much of my time following you around and offering my opinions on what I think is best.

And yes, I have valuable opinions on everything and you really need to hear them. So if you’re sitting down, expect me to be there on your lap philosophizing. And if you’re walking around, you can bet I’ll be underfoot tracing your every step while making conversation with you.

Just thank your lucky stars I’m nowhere near as shrill and loud as my cousin, the Siamese.

It’s a good thing I’m also smarter than most cats and have a knack for communication. I may not understand all the words you speak back to me, but I can read gestures and facial expressions.

So well, in fact, that I can often tell when you’re feeling blue.

In those moments, I’ll pause my counsel to blow in your ear, give you a comforting hug or sing you a song by cooing and trilling softly.

Now while I’m very devoted to my humans, I have to admit I can get a bit competitive with other creatures. For the most part, I have no problem socializing with cat-friendly dogs and young kids, but I can’t play with them long unless I am the center of attention. I just really like to be in the limelight.

The one exception is if you think you’re going to be busy for awhile. I am the sort of feline that is not beneath pouting and pining for attention so you’ll want to consider getting another Balinese for me to play with while you’re gone. I need constant companionship and I’m not ashamed to admit it.

Good company and play helps mellow me out. Otherwise, my activity levels can get crazy. Not only am I a highly energetic feline, but I’m also very smart and crave both physical activity and mental stimulation.

This can be awesome – if you’re willing to play and have fun with me – since I am one of the most playful, entertaining cats around. We can talk for hours, play and hunt prey together, or you can watch me tirelessly figure out how to remove a wedge of plastic from a box using just my paws and sheer brain power.

But if you haven’t got the time and energy for me, my high activity levels could really suck for the both of us as you’ll find me too much of a chatty busybody and I’ll find you conversationally inept, and you’ll come home to find all your toilet paper and tissue boxes empty while I’ll be congratulating myself on having found something to play with all by myself.

Well, to put it simply, my ideal human is one who can meet my constant need for attention and long-winding conversation. Apart from that, I am not that tricky to take care of at all. Jus plenty of banter, belly rubs, pats on the head, reassuring hugs and other sweet gestures and I’m a happy camper.

I also have a soft spot for humans who understand my need to be on the move and decorate the house accordingly. This means lots of climbing perches and toys – both for hunting (I like things that move and make noise) and for mental stimulation.

Despite my name, our breed isn’t of Asian descent. We’re from the USA. According to Grandma Bobbie Jay, our family tree began to take root sometime in 1928 when kittens that had noticeably longer coats turned up in normally short-haired Siamese litters.

The difference in hair length was seen as a mutation and a possible flaw, so these kittens were quickly sold as pets to prevent them from breeding once they became of age. However, it all changed in the late 1950’s when a Californian cat enthusiast named Marion Dorsey, realized that this attribute might just be the start of producing a new breed of cat.

Dorsey came up with a detailed breeding plan for these kittens to coax the long-haired genes to become more dominant. She was hard at work for a couple of years until her efforts were noticed by fellow cat aficionado from New York, Helen Smith, and decided to help her out.

It was Smith who developed the name Balinese as a nod to the graceful dancers from Indonesia. Our lithe figures and long silky coats reminded her of the elegant movements of the dancers. Smith also began entering us to Cat Fancier Association (CFA) shows under the AOV (any other variety) category.

The efforts of Marion Dorsey and Helen Smith came to fruition when the Cat Fanciers Federation (CFF) officially recognized the Balinese/Javanese as a separate breed in 1961 and we were given the same acknowledgement by the CFA just nine years later. The International Cat Association (TICA) and American Cat Fanciers Association (ACFA) eventually followed suit.

I may be emotionally high maintenance, but physically, I’m not tricky to take care of at all. I only have two very important items on my checklist and these are regular exercise as well as a proper diet. Apart from maintaining my svelte physique, giving me the right stuff to eat also prevents me from shedding uncontrollably, which can be a hassle for me and my human. A meticulous weekly grooming is all it takes to keep my tail and coat flawless.

Of course, I do need to have regular visits with my cat doctor every 5 months or so. Although I am generally a tough cat, I am still susceptible to illnesses like gastric disorders, thickening of the walls of the heart and bronchial problems just like other felines. It’s better to be safe than sorry, you know.