I am quite possibly the cutest feline that ever lived. And that’s not conceit – I just have the sort of looks that make you want to scoop me up and silver-spoon-feed me marshmallows ’til the world ends.

I am that adorable.

So what is it about me that amps up the cute factor so much? Well, it might be my large, ridiculously intense Puss-in-Boots eyes. These round beauties come in gold, green, blue, or odd colors and have earned me the nickname “owl in a cat suit.”

Regardless of the shade of my eyes, my stare packs a powerful dose of cutesy – no human is immune. 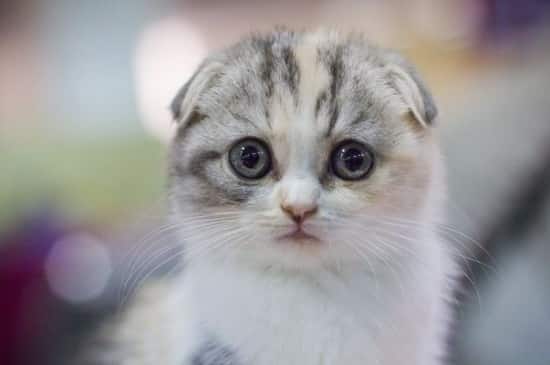 My adorability is further intensified by my endearingly circular head, which makes my face look lovably mellow and jovial.

This friendly appearance is again heightened by delightfully plump cheeks and the absence of a discernible chin.

But my most uniquely endearing physical attribute is, without a doubt, my distinctly droopy ears.

Thanks to a natural dominant-gene mutation, my ear cartilage contains a fold that causes my ears to bend forward and down. Some of us even appear to have no ears at all, further intensifying our owl resemblance.

Depending on the cat fancier you ask, I am also described as having the look of a pixie or a teddy bear. Both super cute, of course.

Unlike what most humans mistakenly think, I am not born with these delightful ears. As a newborn, my ears are straight just like any other cat’s, which means you get to watch their gradual development into graceful folds. It’s complete by the time I’m three to four weeks old. 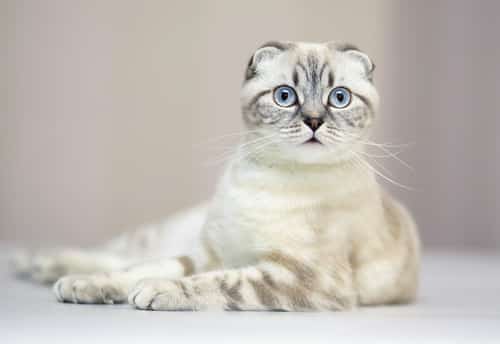 Oh, and just to make things clear – my ears may be droopy, but they work purrfectly. My hearing is great, thank you very much, and my little ears can even maneuver just as well as any feline’s.

Don’t believe me? Turn on some music and watch me swivel my ears like a maestro.

As if my face wasn’t cute enough, the cat gods saw fit to bless me with a lovably pudgy build.

Of course, I’m not actually fat – I actually sport a relatively muscular physique. It’s just that my legs are a little short and my soft, velvety coat lends me an endearingly plush appearance.

My cuteness isn’t just fur-deep – I am cute to the core.

Docile and sweet-tempered, my looks match my personality purrfectly.

In addition to being super laid back, I am 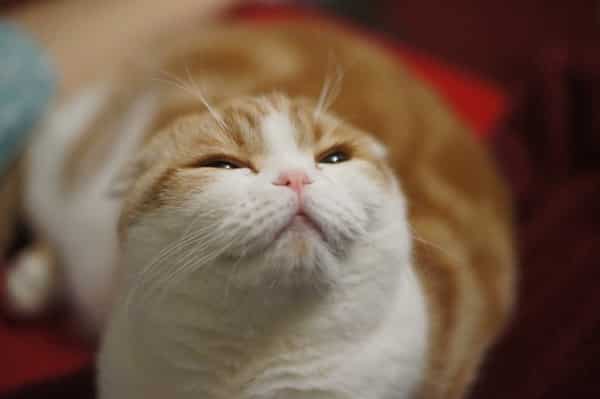 also a wonderfully sociable cat who has no problems getting along with both humans and other pets.

On top of my general friendliness, I also possess exceptional patience and tolerance. I don’t mind being around kids and will even allow them to pick me up and adore me.

I won’t even get antsy or vicious when I think the play has become too rough for my taste. I just turn the other way and look for another fun activity to do.

Yes, I am every bit as sweet as I look.

And as affectionate and gentle as I am, I’m neither clingy nor demanding when it comes to attention – I get plenty of it anyway – and can be left alone without getting restless or anxious. 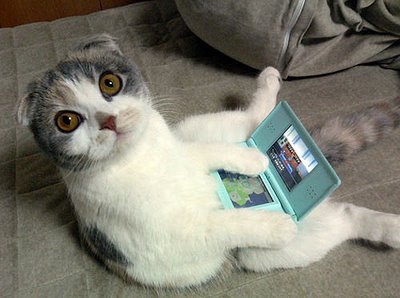 That’s ’cause I always find plenty to do on my own. You see, I’m a very inquisitive cat and I can entertain myself for hours exploring every nook and cranny in the household.

I’ll even scurry up cabinets, bookshelves and curtains just to get a better look at what’s happening in and around my home.

Of course, my curiosity will naturally involve you. So don’t be alarmed if you catch me stalking you around the house.

I just want to know what shenanigans you’re up to. You most likely won’t even notice me, anyway – I am very stealthy. Like a ninja.

Speaking of ninjas, I admire their noiselessness and try to emulate it in my own life. You’ll rarely hear me caterwauling my cute little head off every time I have something to say.

I believe silence is golden. Well, unless it’s something really important, like if my food or water bowl needs refilling. But that’s an emergency. And even then, I’ll be sure to let you know in soft meows and gentle purrs.

Even my vocal chords are pure cuteness. 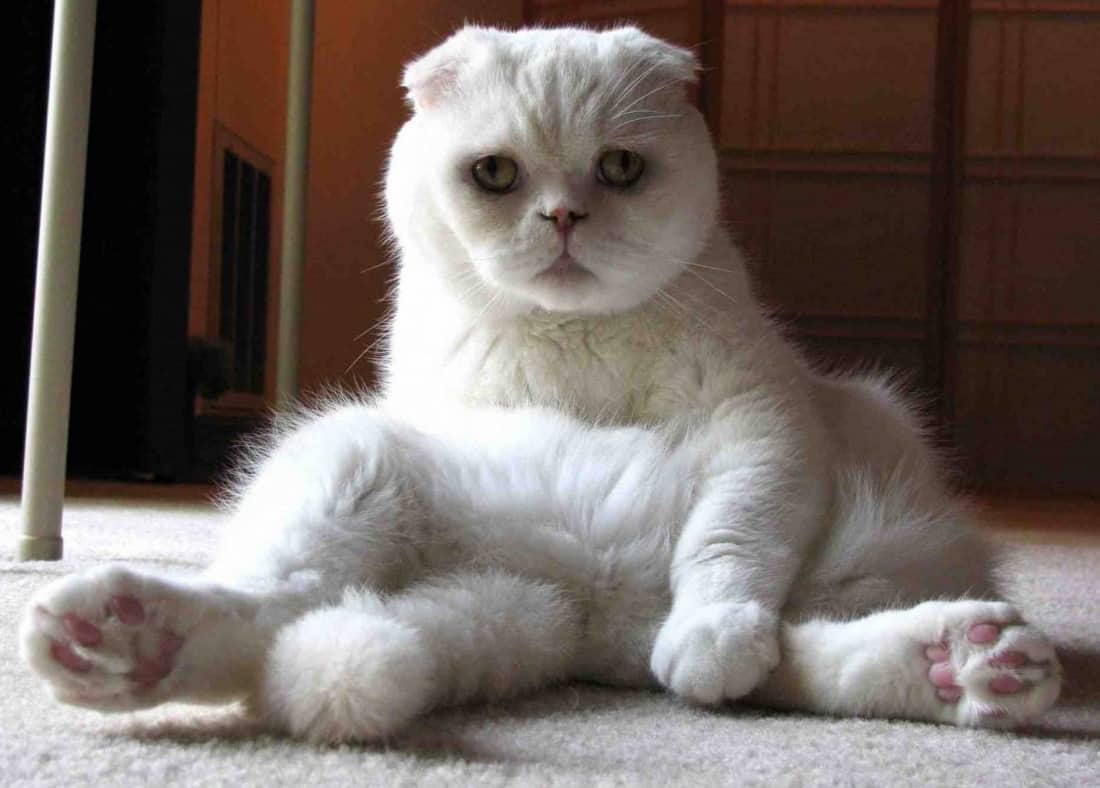 Despite my exploratory nature, I’ll be the first to admit that I’m not particularly active. But that doesn’t mean I’ll pass up a chance to play a game or two with my humans.

I have a soft spot for interactive games as well as toys that fire up my brain power like puzzles, especially the ones that award me treats.

Oh, the last thing you should know about me is that I have a quirky little habit.

Nothing weird – I just like to sit or lie down in odd positions like I’m posing for a picture. And no, I don’t mind if you snap a few.

I am well-known in feline circles as one of the easiest cat breeds to take care of, which makes me a smart choice for newbies who are just starting out in the fancy as well as older fanciers. I am also ideal for homes with younger children and other pets.

Yea, I get along with pretty much everyone. And how could I not? I’m naturally sweet-tempered, undemanding and affectionate yet independent. I’m the whole package wrapped in a ribbon of cuteness.

In 1961, a Scottish shepherd by the name of William Ross noticed an odd-looking white cat that made its home in a neighbor’s Tayside barn. Tayside is located in Coupar Angus, Northwest of Dundee. Now while the feline mostly looked like any other regular cat, it sported ears that drooped down its head, which gave it an owl-like appearance. 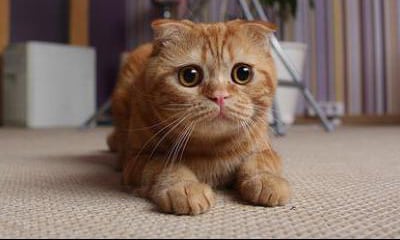 After asking his neighbor about the cat, Ross discovered it was a female named Susie. And much to his surprise, he also learned that Susie was nearly ready to have kittens in just a few weeks.

Ross eventually acquired one of Susie’s female kittens that also had uniquely shaped ears and named her Snooks, which went on to become the matriarch of the Scottish Fold breed.

When Snooks became of age, William Ross and his wife set up an experimental breeding program that involved pairing her with local felines. When Susie consistently produced kittens that displayed the same lop-eared attribute, Ross decided to get the kittens officially recognized by local cat registries since he believed he was on the verge of establishing a new cat breed.

The name “Scottish Fold” was chosen not just as a nod to our odd physical trait, but also to our country of origin.

Now while the Scottish Fold was accepted as a new breed in the mid-1960’s by Great Britain’s Governing Council of the Cat Fancy (GCCF), we were controversially banned just after a few years due to speculations that our specimens were extremely prone to health issues like weak spines and deafness.

As an effort to continue the lineage of the Scottish Fold breed, fanciers imported a few of them to the United States in 1971, where we quickly gained popularity. American breeders decided to develop the breed even more by outcrossing us to British Shorthairs and American Shorthairs, which resulted in the modern Scottish Fold look and temperament.

Apart from being recognized by the Cat Fanciers Association (CFA), which also awarded our breed our Championship status in 1978, the Scottish Fold is also accepted by The International Cat Association (TICA).

How to Keep Me Healthy and Happy scottish fold health

Now while I am known in the world of cat fancy as one of the hardiest felines when it comes to overall health, there are a couple of key points fanciers looking to have me as a pet should take note of. 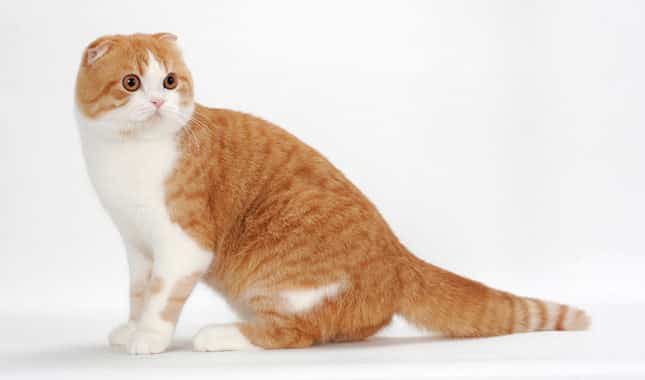 First, I need to have my ears cleaned more often since their folds can speed up the accumulation of wax and oils in and around them.

Second, make it a point to get a Scottish Fold kitten that wasn’t produced by breeding two lop-eared cats because this commonly leads to osteochondrodystrophy, a painful skeletal abnormality that worsens over time.

Moreover, apart from giving me a meticulous grooming at least once a week, you should also keep a close eye on my diet to keep me from packing on extra pounds.

This may be challenging since my cuteness makes people want to give me treats – lots of treats – but keep in mind that it ultimately doesn’t benefit me.

I’ve always had a fondness for toys that encourage me to make use of my smarts, like this PetSafe SlimCat Interactive Toy and Food Dispenser. Apart from being a fun source of exercise and play, it also doles out yummy treats if I do a good job moving it round and round. You can also regulate how much kibble or treats to put inside to prevent me from packing on pounds I don’t need.

Interactive games are on top of my list when it comes to the things I’d like to do with my humans so swing this Fish Feather teaser around and around for me – it’s a fun way to get me (and you) some exercise.

Scratching time is always a good time for me and I’d be one happy cat if I got my paws on this Petstages Soothing Cat Easy Life Hammock and Scratcher. It’s easy to assemble, with a sturdy yet comfortable design – a plus for you. And it comes with catnip – a plus for me.

How much would a Scottish Fold kitten be ?