I am the proud owner of some of the most distinctively stylish markings in all the feline world. A striking contrast of darks and lights accentuate my face and body, giving me the appearance of a cat who’s stepped straight off a brilliantly talented artist’s canvas.

But before we proceed, I should give credit where credit is due: I have inherited my beautifully contrasting coat hues from the Siamese, who I have to thank for the wonderfully dark color points accentuating my ears, face, legs, and tail, as well as the lustrous blue of my almond-shaped eyes. 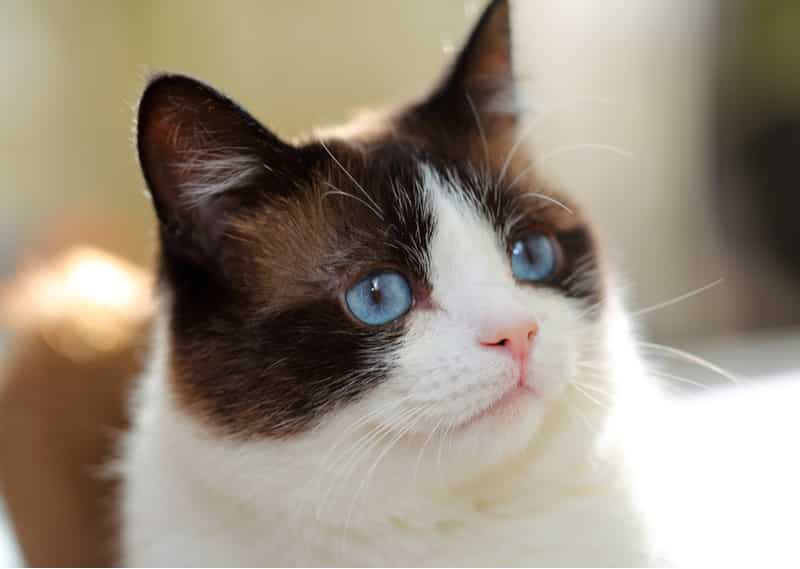 My elegantly point-marked face is uniquely my own. Unlike the Siamese, my head is rounded with smooth contours and puffy cheeks that make me look friendly and sophisticated at the same time.

And to take the sophistication up a notch, nature has endowed me with a white upside-down V-shape that starts from my forehead and extends down over my nose and muzzle.

This cool little marking gives me a white nose and really highlights my eyes, giving me a sort of Batman mask.

But that’s not all – by far my most popular features are the tufts of white fur that cover my paws and ankles. 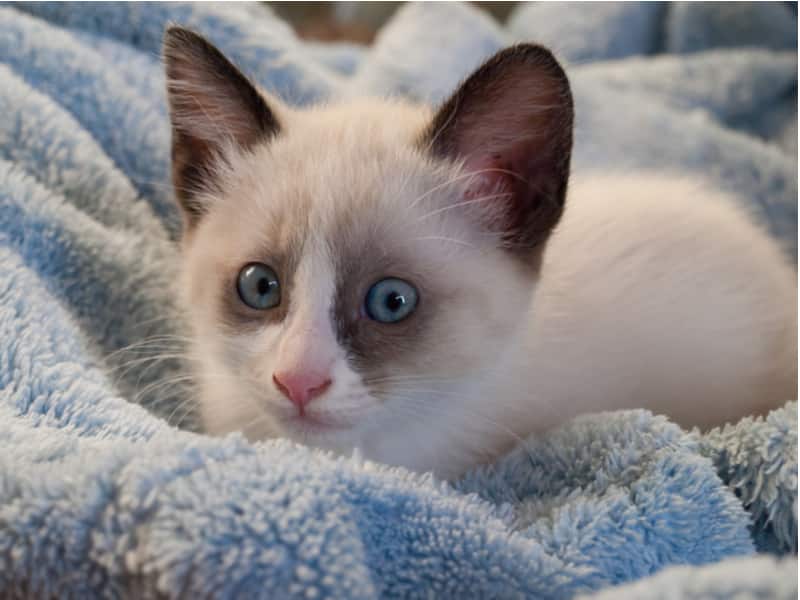 Known as ‘booties,’ my four white paws give me the appearance that I’m wearing snowshoes, which explains the name of my breed.

As such, cat fanciers widely regard me as one of the most graceful looking pedigreed cats.

Of course it doesn’t hurt that on top of my unique color accents, I also possess an overall willowy appearance without even a hint of bulky, prominent muscles.

Yes, underneath my striking colors, I’ve also been blessed with the sort of well-balanced physique that can make even a ballerina or supermodel jealous. 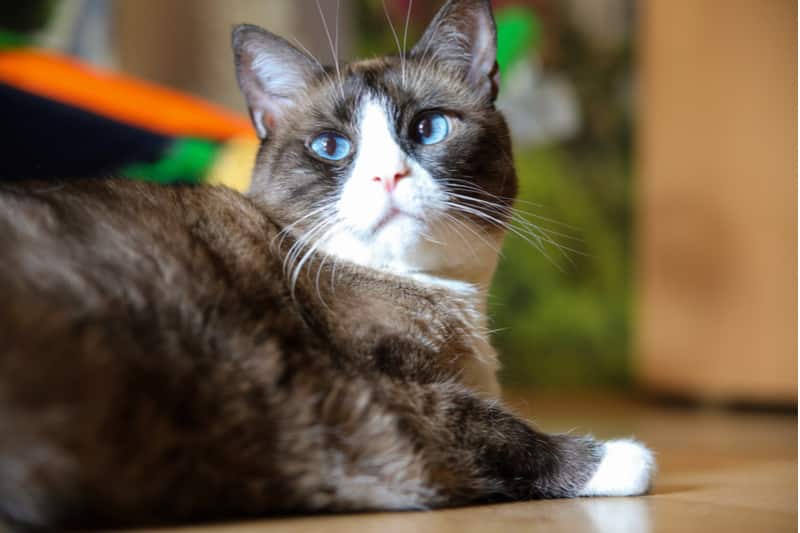 To be purrfectly honest – I can come on a bit strong. I simply can’t help being loving and affectionate, like, all the time.

Life is short, after all, so why shouldn’t I shower my humans with gentle pats, hugs and whatever other caring gesture I’m in the mood to express

Same goes for quality time together. I’m the sort of feline that likes a lot of it. Which means I’m going to get in on everything that my humans are doing. Whether it’s vacuuming the living room or deciding what to have for dinner, I will never hesitate to join right in and contribute an opinion or two. 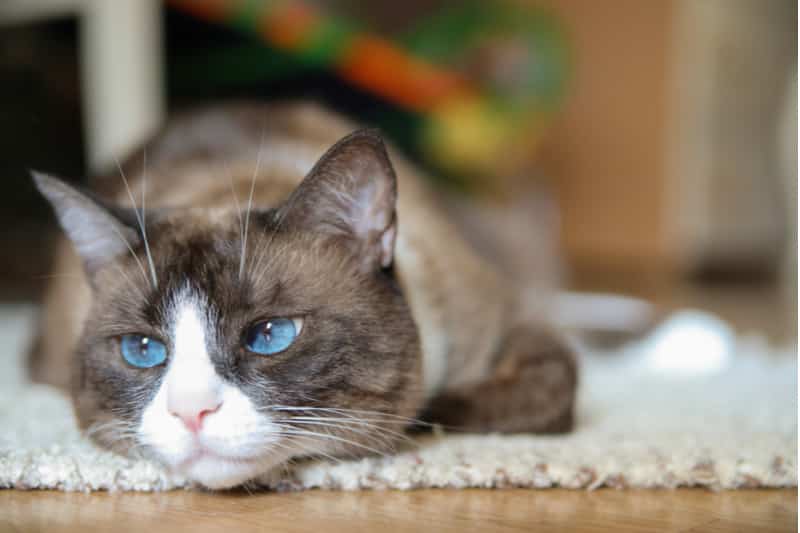 Yes, I talk a lot. But I have the sort of melodic singsong manner that never gets annoying. In fact, I’m quite a pleasure to listen to.

Being naturally talkative and affectionate, I’m among the most sociable cat breeds in all the feline world. It’s ridiculously easy for me to make friends – both human and non – but I can get aloof from time to time. But don’t worry a bit when this happens!

It just means I’m busy investigating a nook or cranny that seems suspicious or hatching a plan on how to extract catnip out of a puzzle toy.

Trust me, I’ll be right back with all my attention and affection and we can go right back to spending all our quality time together.

Oh, and don’t think you’ll be able to get away from me by going where no feline dares to go – in water.

I actually love that wet stuff and won’t think twice about climbing in the tub, jumping in the pool, or even hanging out amidst the sprinklers with you.

But my affinity for water is not all fun and games – at least not for you.

My aqua fondness means that I’ll often chill out near the kitchen sink to play with the water when you’re not looking. This may lead to an increase in your water bills if I figure out how to turn the taps on by myself.

And of course, if you have fish…you might want to check up on them often. Like, very often.

Due to my relaxed disposition and overall friendliness, I am a feline that’s ideal for any fancier. It doesn’t matter if it’s your first time owning a pet cat or an older enthusiast still having a hard time picking out a companion pet. I am also very patient and tolerant with younger children, so you won’t have to worry when I’m around them.

Just keep in mind that while I won’t be crazy cantankerous about demanding attention, I am a very affectionate feline that needs regular one on one time with my humans. And despite my sparkling personality and happy-go-lucky disposition, leaving me alone for long periods of time can make me feel anxious and restless.

So if you plan to be out a lot, at least get me some feline or canine company to romp with.

My breed began in the late 1960’s when a Philadelphia-based Siamese breeder by the name of Dorothy Hinds-Daugherty was pleasantly surprised to find that one of her cats had given birth to kittens that sported prominent white markings on their legs and paws. She thought they looked like they were wearing boots and mittens.

Intrigued by this rather unique physical trait, Hinds-Daugherty decided to experimentally pair them with an American Shorthair with tuxedo markings when they became of age. The result was a graceful-looking cat that flaunted a distinct “V” facial marking and the signature white paws, which inspired the name “Snowshoe.”

Vikki Olander, one of Hinds-Daugherty’s fellow breeders, helped her write the standard for our juvenile breed and raise recognition from cat registries. Although my ancestors quickly gained popularity in the next few months, inconsistencies involving our breed’s standard and poorly-kept documentation halted the progress temporarily.

Interestingly, my breed can be outcrossed to Siamese cats, Oriental Shorthairs and American Shorthairs without penalty.

I am considered as one of the easiest felines to take care of in the world of cat fancy. Apart from not having any special dietary requirements and being very hardy health-wise, I can also groom myself without a fuss.

I’m very self-reliant that way. But keep in mind that if you don’t see me grooming myself as frequently as I used to, it probably means I am sick and could use a visit to the vet.