The Sphynx is known for being a friendly, loving, devoted and affectionate feline.

The first thing you’ll notice about the Sphynx cat is the total lack of hair. With a lean, muscular, fit body and a great attitude the Sphynx is a standout among cat breeds. 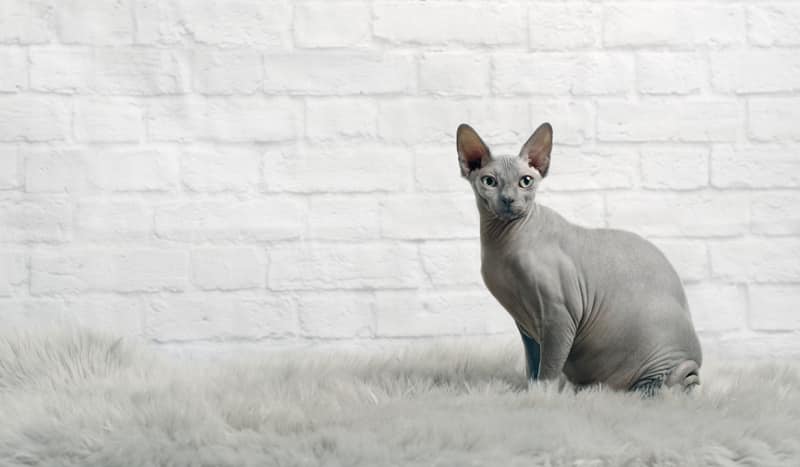 While I may not sport a “normal” coat, my slightly wrinkly body still displays distinctive colors and patterns, particularly chocolate, lilac, blue, black as well as tortoiseshell. Cat registries have categorized at least 45 different shades of the Sphynx cat breed.

And whereas I may not be endowed in the hair department, my body is as toned and well-developed as they come. In fact, I have a slightly more muscular physique than most cats, ‘though I’m built in lean muscle, lending to a gracefully athletic appearance that’s as beautiful as it is powerful. 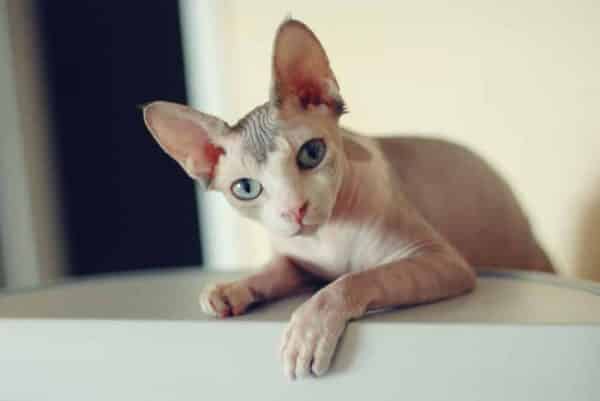 Take my legs, as an example. They may look willowy but they possess all the force I require to propel me into quick dashes or an agile leap up to the highest spots in the house.

Oh, and in case you’re wondering what the difference is between me and the other hairless cat – the Donskoy – it’s all about the genes.

My hairlessness is caused by a recessive gene, which means both parents need to have that gene in order for a Sphynx like me to enter the world. 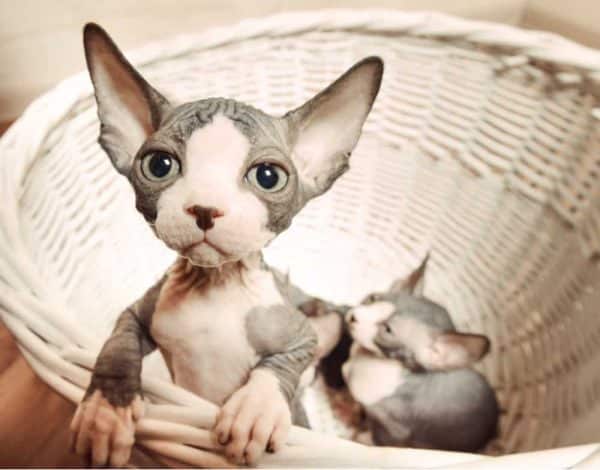 If only one parent has the gene, then maybe only 50% of the litter will be blessed with hairlessness. It’s not recommended to breed a Sphynx with a breed that doesn’t carry the hairlessness gene.

In the Donskoy’s case, it’s a bit different since his hairlessness is caused by a dominant gene, which means that the babies will end up hairless even if only one parent has the gene. That does make things easier for the Donskoys.

My name sounds so regal, so mysterious, so intimidating.

Well, let’s just say I’m nothing like my name suggests – I am actually pure silliness, unadulterated fun, and a lot of extremely devoted, loving affection.

I’m such a bundle of lively enthusiasm that fanciers describe the Sphynx breed as being part monkey, part dog, part child and part cat. And it couldn’t be truer. My energy levels are off the charts and I love to monkey around with anything that catches my attention.

I’m a natural performer and won’t hesitate to show off whenever I have even a semblance of an audience.

I’ll chase, pounce, jump, and scale the highest of heights. Then I’ll be right back by my human’s side, showering him or her with very public displays of affection.

That’s ’cause I’m a very sociable cat who loves the company of humans and even other pets. I love my humans so much, in fact, that I’ll spend much of my day following them around, wagging my tail and purring with unabashed affection. 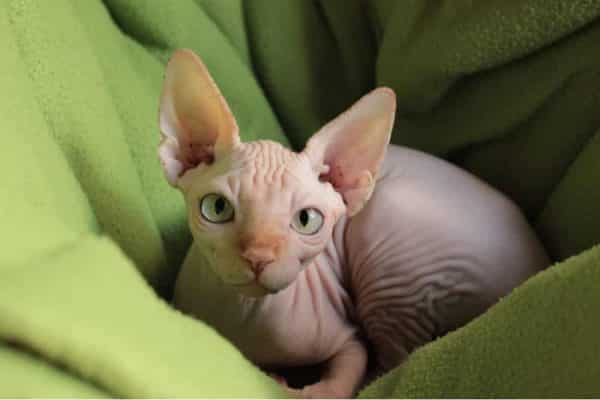 I’m never one to shy away from being adored, I am ready and willing to receive petting sessions, belly rubs, scratches and warm laps from anyone who offers.

As you know, I don’t have much hair so I tend to get cold easily, which is why I’ll be seeking out the warmest spots in the house, say, your lap or under your sheets. Get me some clothes, please, if you plan on keeping me happy when it’s chilly out.

Got kids? That’s totally fine with me, too! I have no problem mingling with little ones and will be a happy participant in their games.

I guess that’s ’cause I’m quite like a child myself, ever curious and mischievous. And I’m smart, too, and use my cleverness every day to investigate every nook and cranny of my surroundings and learn games I can play with my humans, like fetch and tag.

Now while I am not a silent cat, I choose to communicate in pleasant trills and purrs that I hear are far more pleasant that those of that Meezer, the Siamese. Plus, I’m not a fan of endless, mindless chatter so I won’t be talking my head off all the time. I’m a very heavy eater so you’ll usually hear me speak up to express that I’d like to have seconds (or thirds) – it’s up to you to play moderator. 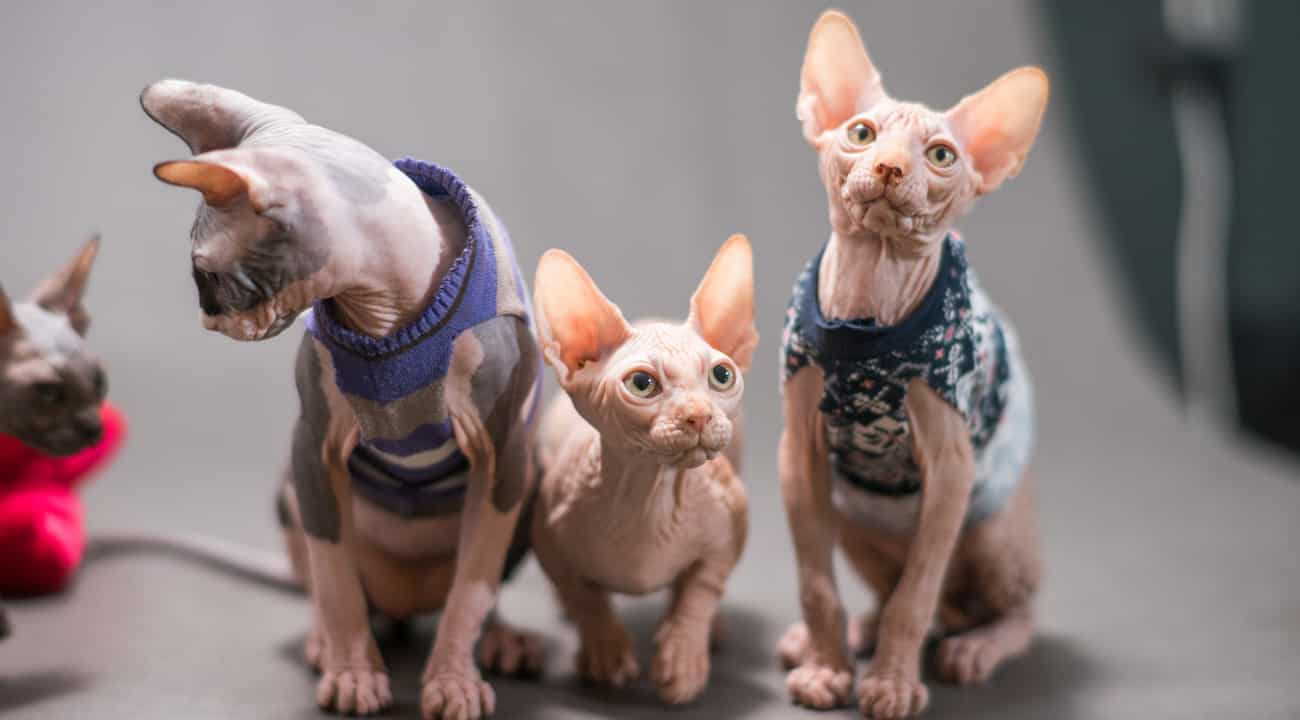 I’m friendly, loving, devoted and affectionate – sounds ideal for everyone, right? Well, not quite. My very high energy levels and meticulous grooming needs can be too much for newbie cat owners as well as those looking for a relaxed sort of companion cat.

I get along best with humans who have time, energy, and the experience to be able to handle a highly active, devoted feline. I’ll accept no less.

There are two very popular versions of how the Sphynx breed came to be and I’ll give you a quick rundown of each one.

The first version is a black and white domestic shorthair named Elizabeth gave birth to a hairless kitten in Toronto, Canada in 1966. Elizabeth’s guardians simply thought that the male kitten needed more time to grow his coat, unlike the rest of his litter that flaunted normal ones when they were born. He was lovingly called Prune as a nod to his unusual appearance.

When Prune remained hairless until he was nearly mature enough to mate, his human companions believed he may have a unique genetic condition that gave him his unusual appearance. They proceeded to experimentally pair Prune with a number of normal-coated felines, which resulted offspring that were either hairless or furred, which led them to conclude that it was, in fact, a recessive gene was responsible for his baldness.

This unique genetic trait attracted a lot of dedicated enthusiasts soon after who worked to develop our breed and get us recognized by cat registries.

In the second version, a couple of Minnesota farmers, Ethelyn and Milt Pearson, discovered a female kitten that looked nearly hairless frolicking in their barn in 1975. The Pearsons were quite stumped because the kitten’s mother, Jezabelle, sported a rather bushy coat. They called her Epidermis because her wrinkly skin was still very much noticeable even though she had sparse tufts of hair on her.

When Epidermis became of age, she was bred with another hairless cat named Dennis. The kittens produced were eventually sold to Kim Mueske, a cat fancier and breeder from Oregon, who began proliferating the juvenile breed in the next few months.

Now while the real score about how my breed really developed may be quite hazy, what we all know for sure is that we were officially accepted by the Cat Fanciers Association (CFA) and granted our very own Championship status in 2002.

Keeping me hale and hearty comes down to proper, regular grooming. Think of Sphynx cats as babies of sorts – hairless and not good at cleaning. As such, I require meticulous grooming on a weekly basis and this means bathing.

Washing us helps to get rid of dirt, dander, and other nasties that can accumulate on our delicate skin and cause rashes and similar issues, and it also helps settle the oils in my skin to keep it in great shape.

Apart from grooming, tt also helps if you give me my very own warm spot in the home where I can lounge around whenever the weather’s a bit chilly. I am quite sensitive to cold and can be prone to sniffles if I don’t get adequate warmth when I need it.

Oh, and giving me a regular application of moisturizer also helps prevent sunburn and chafing.