The Toyger is a domestic cat breed that are developed to look like toy tigers – thus the name – the ideal breed look is a short, reddish-orange coat with black tiger stripes. It’s the end result of breeding shorthaired tabbies to make them resemble a miniature tiger. 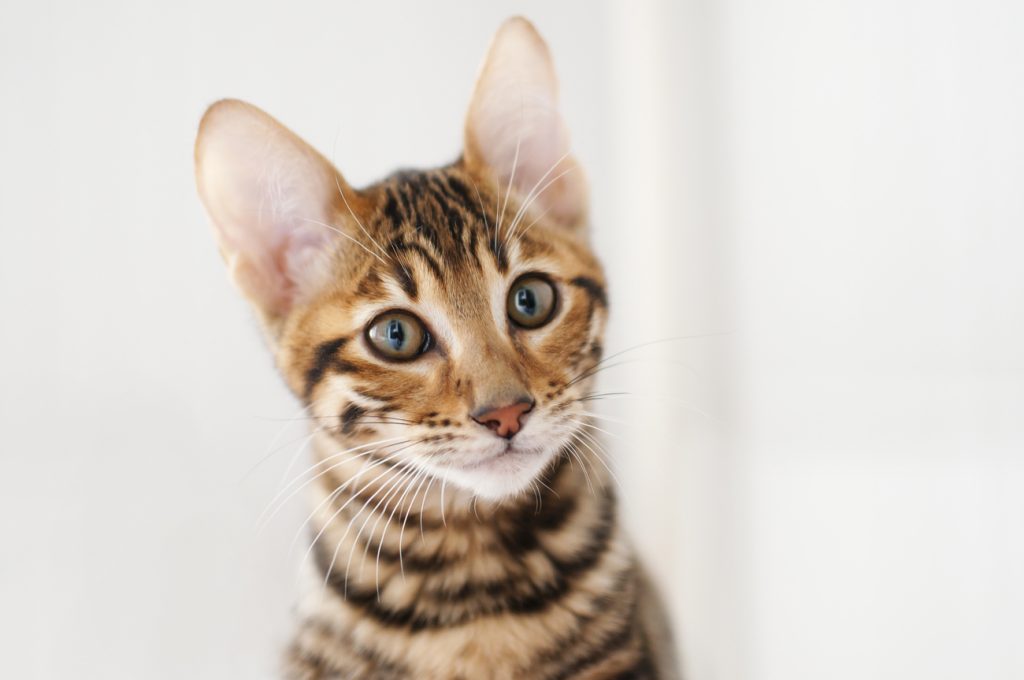 Breed: Toyger cat
Size: Medium, 7 to 10 lbs
Energy Level: 3/5
Talkative: 3/5
Coat: Short and dense, in tan and orange, with prominent black stripes and tiger-like patterns.
Hypoallergenic: No
Seeking: I get along with almost everyone.
Child Friendly: Yes
Personality Snapshot: Fairly active and loves to socialize, easily gets along with other pets and tends to follow my humans around.

Compared to other felines that flaunt continuous lines and spots like in the case of spotted and mackerel tabbies, my coat has stretched rosettes and broken vertical stripes here and there.

And this coat of mine is one of the most luxurious and striking in the world of cat fancy.

It feels like velvety silk when you run your fingers through it and avid fanciers admire my coat for its unique combination of pumpkin, dark yellow and black shades that really make me stand out among other cats. 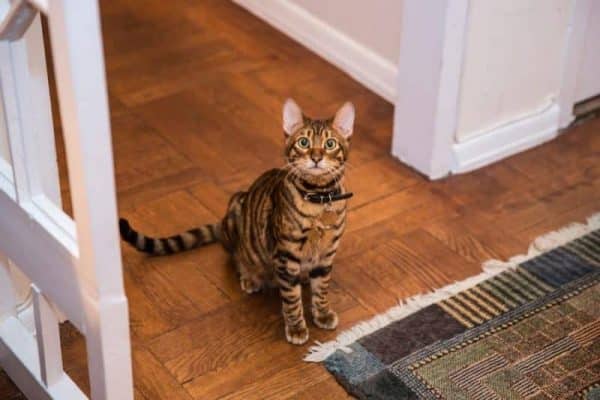 But it’s not just my coat that makes me look like my wild relative. I’ve also got the physique to go along with the furry aesthetics. Apart from having a fairly muscular body that gives me an overall robust appearance, my legs are also slightly thickset, yet elegant. My long, flowing tail completes the exotic package.

Even my small face is tiger-like, with a strong, wide chin and purrfectly perky, round and wide-set ears that top off my wildcat appearance.

And ‘though I wear a rather no-nonsense expression, you’ll soon find out that my personality is anything but. 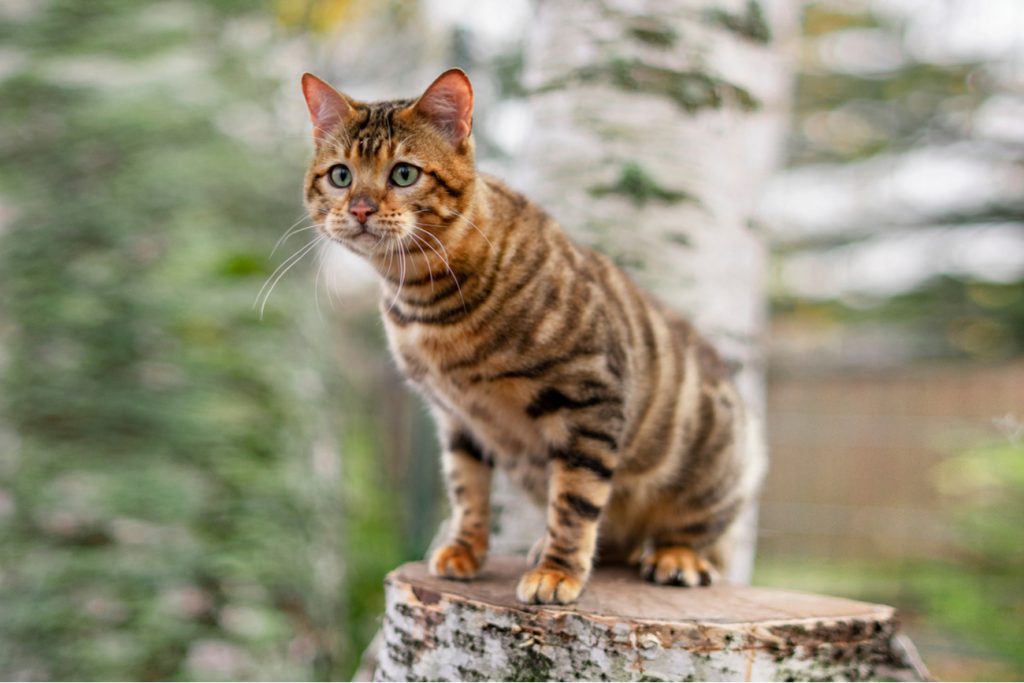 I might look like a little tiger, but I haven’t a ferocious bone in my adorable body. In fact, I’m as easy-going and sociable as a cat can be! I love to mix and mingle with humans and other pets and my friendliness makes it easy-peasy for me to adapt to new surroundings and make instant friends with new people.

Speaking of new people, I think strangers are just friends you haven’t met yet. Which is why you’ll often see me hanging out near the door ready to greet visitors as soon as they drop by. 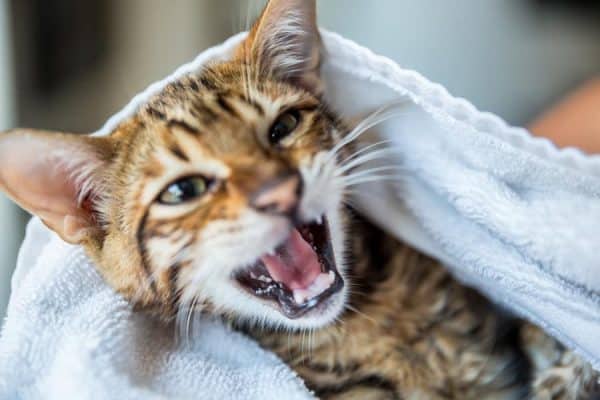 ’m open to new friends of any gender, age, and number of legs. Cat-friendly dogs are okay with me and I’m a total charmer when it comes to kids. Apart from being very patient and tolerant with them, I will also be a happy participant in their games. Plus, I don’t get upset easily and won’t resort to using my claws when little humans try to pick me up or handle me a little roughly.

At most, I’ll probably just scamper out of reach. For me – an expert climber – that usually means the highest spots in and around the home like bookshelves, cabinets and windowsills. But don’t think I’m being anti-social by climbing out of reach – when I know you’re watching, I won’t shy away from giving you a delightful show of my acrobatic finesses.

Oh, and just between you and me, I am a fairly intelligent cat. Aside from having a penchant for puzzles and other toys that encourage me to use my smarts, I can be also trained to do a few tricks.

I am also one of those rare felines that can be fitted with a leash and taken for walks.

Just be sure to always keep an eye on me while we’re out since my eye-catching tiger-patterned coat makes me rather attractive to thieves.

Unlike other breeds that can be generally quiet, I am a cat that won’t think twice about speaking out when I think my opinion is needed. Besides frequently engaging my guardians in a chat, I also tend to express my ideas when something catches my attention, like when I notice there’s a new picture on the wall or when the vacuum cleaner is switched on.

But while I may be a vocal cat, I only communicate in soft purrs, coos and trills that are more melodic than annoying.

Us Toyger cats are easy-going and sociable, we get along with pretty much everyone. It doesn’t matter if you’re a newbie learning to handle your first cat or an older enthusiast looking for a companion kitty.

And of course, I get on well with little kids and other pets so I’m also purrfect for families with children and multi-pet households! 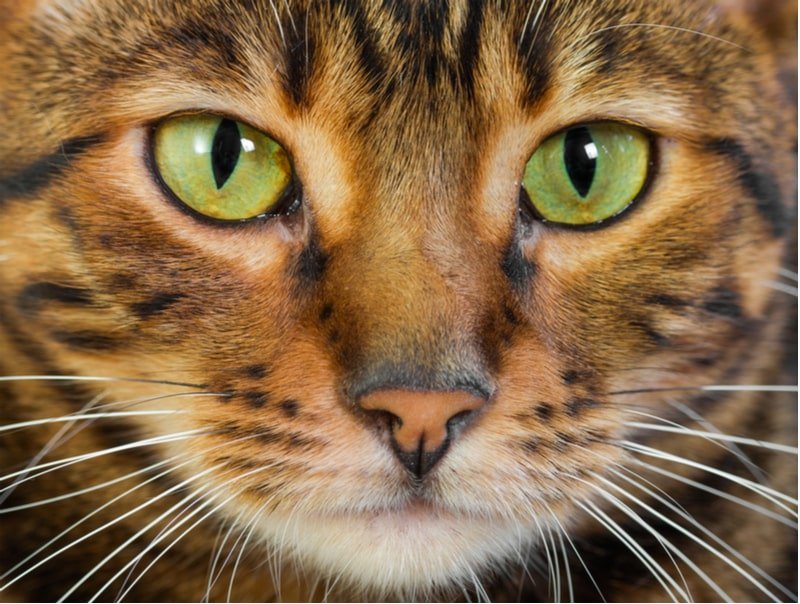 The Toyger breed began to take root in the 1980’s when an American breeder by the name of Judy Sugden of the EEYAAS Cattery set up an experimental breeding program that aimed to produce kittens that flaunted coats with clearer and more prominent mackerel tabby markings.

However, she noticed that one of the kittens born out the program had very distinctive spots on its temples, an area that usually didn’t have a prominent feature among domestic felines.

Instead of pushing through with her previous project, Sugden decided to take on a different goal: to produce a kitten that sported a circular face pattern that resembled a tiger’s.

She also integrated a tom imported from India named Jamma Blu into the program because it possessed spots between the ears, another unique feature that was quite uncommon among pedigreed cats.

It is said that Sugden meticulously handpicked around forty felines in the years that followed to achieve the results she wanted. Two of Sugden’s fellow breeders, namely Alice McKee of Windridge Cattery and Anthony Hutcherson of JungleTrax Cattery, also got in on the action, hastening the development of our juvenile breed a bit.

Sugden and her fellow breeders chose the name “Toyger” as a portmanteau of the words “toy” and “tiger,” the purrfect name for us, a domestic cat with tiger markings. In 1993, The International Cat Association (TICA) officially granted our breed Registration status, which was raised to Championship in 2007.

I am a cat that is really easy to take care of. Aside from only needing very minimal grooming and brushing, I also don’t have any special diet requirements compared to other felines.

Just one thing, though – avid fanciers recommend keeping me safely indoors since I can be a hot item among crooks due to my rarity and uniqueness of my coat.