So, you’re thinking about getting a kitten or cat. That’s great! Being a feline-owned human is a wonderful experience.

But should you get a male or female kitten? What are the pros and cons of male cats vs female cats?

Do male cats have advantages over female cats, and vice versa? Is there such a thing as a feline battle of the sexes?

Then we have breed. Ah, the possibilities are inexhaustible! There are flat faced kittens, long-haired fluffy kittens, quirky hairless kittens, and the list goes on and on.

Well, the first thing you should know is that each kitten has its own distinct personality. On top of that, each cat breed comes with its own unique character traits. Some breeds such as the talkative Siamese and loving Maine Coon are very sociable and affectionate, while others such as the Russian Blue and Persian are more independent and need more alone time.

So, in this article we are going to go over some general advantages and disadvantages of male vs female cats. Let’s get a better idea of which cat gender is best for you! 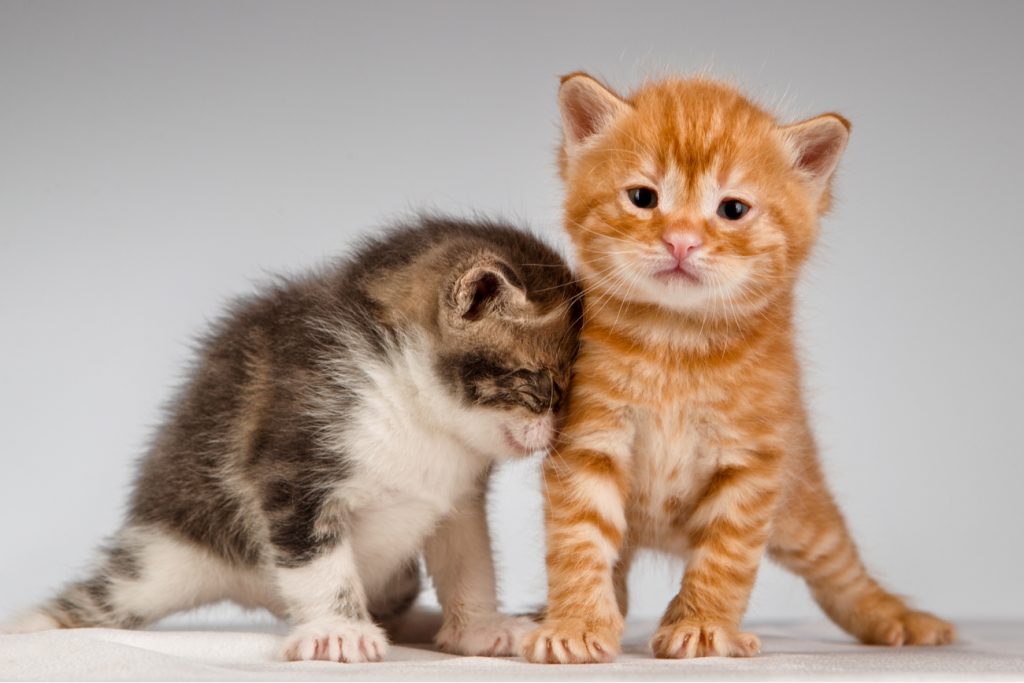 The Pros and Cons of Male Cats

Unfortunately it’s not all cat kisses and snuggles with male cats, they also come with some drawbacks.

Un-neutered male cats are almost guaranteed to spray urine extensively all over your house to mark their territory. And un-neutered male urine is invariably especially stinky.

Un-neutered male cats will be absolutely desperate to go outside, and are almost guaranteed to do so, no matter how vigilant you are. This wanderlust can lead them far from home. Tomcats are also likely to disappear for days on end, and to get into bad fights with other cats. They have a strong desire to rule. This can include increasing their territory, hunting, seeking out a female in heat, wandering.

Un-neutered males have a very strong instinct for fighting and will even turn their aggression on their human companions on occasion. Of course, the environment, siblings, pet parents can often influence behavior more so than genetics itself.

It is especially important to have a male cat neutered early, as when a male cat is allowed to get into the bad habits of roaming, spraying, and fighting, they are even more unlikely to leave those habits behind, even after neutering takes place.

The Pros and Cons of Female Cats

Many people find that spayed female cats become almost maternal to their human companions, and are extremely affectionate, loyal, and sweet. Female cats also come with some behavioral drawbacks of their own, like…

Even though many people think that only male cats spray, the fact of the matter is that some females do, too. This is especially the case with unspayed females. Spraying is part of being territorial, and unspayed female cats are very likely to be strongly territorial. This is partly because of the instinct for having safe space in which to raise kittens.

Un-spayed female cats in heat can be extremely noisy! They are looking for attention. That’s attention of the lustful kind – they are letting male cats in the area know they are in heat. If you don’t already know it you will definitely get to know the meaning of the word yowl, and you certainly will not get your full eight hours of sleep when a female cat is in heat.

Female cats, especially un-spayed ones, may be a bit territorial as a result of the fact that cats in the wild have to be protective of their kittens. However, on the whole, spayed female cats are a lot less territorial than un-neutered males (that is a bit of an understatement, actually)!

This is in no way true for all female cats, but some cat owners do find that female cats – especially un-spayed ones – can be moodier and more unpredictable than males.

What is the most important lesson learned here really depends much more on the personality of the individual cat than on whether they are male or female.

Spend some time with the kitten you are interested in adopting, to get to know its personality as the pros and cons above are a general guideline but can vary when it comes down to an individual cat. The tendency to be sociable and affectionate usually shows up very early in life. Lollipop, the huge, cuddly calico cat that I had as a child and adolescent was a female, and she was extremely affectionate right from the very start!

It was that characteristic of her personality that made her the one we chose. She was much more affectionate and sociable than her brother, who was the only male of the litter. This is just one example of the importance of individual personality in felines!

And as you probably already noticed, both male and female cat behavior is hugely influenced by spaying and neutering.

Many of the drawbacks of both genders, like spraying and yowling, seizes to be a consideration if you’re going to spay or neuter your cat. So overall, whether you decide on a male or female kitten is less important than finding a kitten with a personality that’s the purrfect fit for you and then making sure that your cat is spayed or neutered at the right time!

So you know what you’re getting yourself in for you can hear some common cat vocalizations such as yowling, meowing & purring on our cat vocalization page found here. Also check out our related blog articles on Why do cats meow, Why does my cat bit me & Why do cats purr.

A set of audio cat vocalizations including yowling, purring & meowing. WARNING: These sounds may result in a negative/aggressive response from your cat. Please use responsibly!

Table of Contents They bring you corpsesYour cat stalks youYou get the purrfect purrHead butts all overFeet up, paws behind their head, belly exposedNibbles (not bites)Haunts your hideoutsThe slow blinkYour cat licks youYou get kitty massagesYour cat sleeps with (or on) youThey show they’ve missed you Spread the love: Do you struggle to tell the […]

Why Do Cats Meow?

Table of Contents Introduction: Why do cats meowFeed me right meowI want thatTalking to themselfGive me all your attentionI’m happy to see youWhere the heck are youI’m feline stressedI’m lonelyI’m confusedI’m not feline so well Spread the love: Whether it is a short meow or a long drawn our meoooow, your cat is trying to […]

10 thoughts on “Male Cats vs Female Cats Pros and Cons”