The Maine Coon cat is a big, proud, fabulous feline. They are truly a visual marvel to behold. Built to endure a harsh climate, the coon is the sort of feline that captivates, astonishes, and even strikes a bit of healthy fear into the hearts of beholders.

I owe much of my intimidating presence to my wildcat looks – I hear I look a lot like the feral bobcat. And ’tis true, I do have the appearance of a beast that’s just emerged from the wilderness, flushed with the success of a fresh deer lunch.

And of course my overall size adds to my larger-than-life aura. My muscular body prominently displays a big-boned structure that’s emphasized by a puffed-up chest framed by thick, heavy shoulders. My legs are equally strong and stocky and my large paws are lined with scattered tufts of hair, which makes me look like a cat bred for the wild. 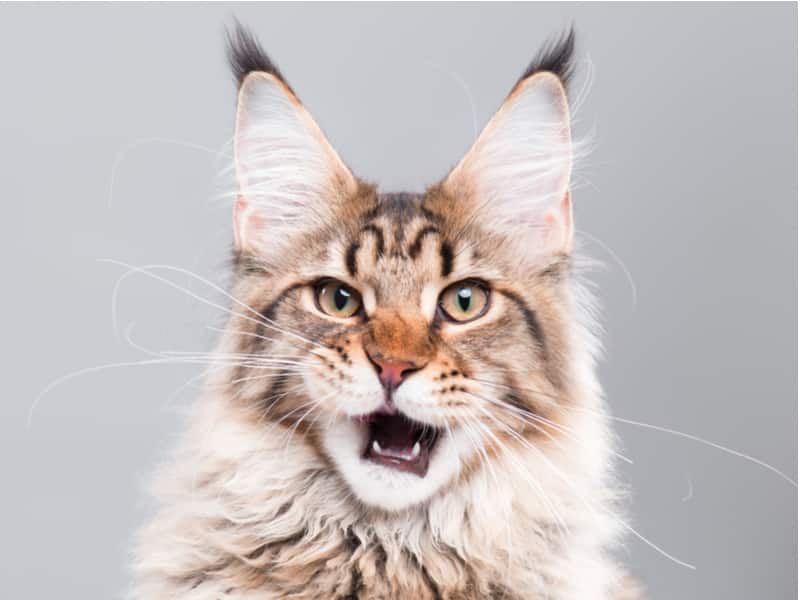 I’m certainly no light-weight – I can easily reach up to 20 pounds, and some of us weigh close to an astonishing 30 pounds.

Apart from being larger than most breeds, I also sport a coat that is fuller and thicker. My coat and tail can be easily compared to an all-weather jacket made of a dense, shaggy coat that easily protects from the elements like rain and harsh sunlight.

Interestingly, although my coat is thicker and fuller, it has a soft, cottony texture that makes it rather resilient to matting.

Cat experts share that this isn’t an aesthetic feature of my breed, but rather a key factor in my survival. My ancestors did thrive in rough, cold wilderness after all. 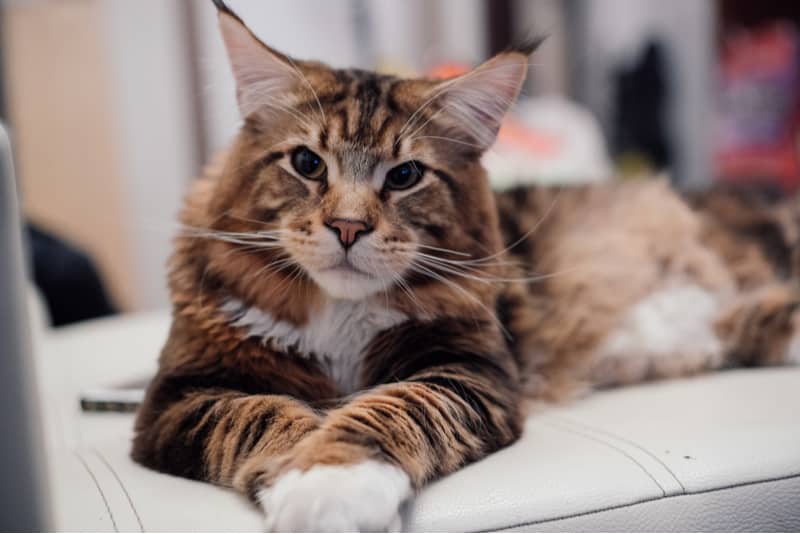 My head is squarish and exhibits features that are not as smooth compared to other breeds. My cheeks are pronounced and set high on my face. My ears are large and shoot straight up, with noticeable clumps of hair that make them resemble those of a lynx’s.

My eyes are round and expressive, yet some cats of my breed have eyes that display a slight slant to them. They are very sharp and have been considered as one of the most important assets of my forebears when they were still regarded by farmers and sailors as their first line of defense against rodents and other unwanted visitors.

My eyes can range in color from bright shades of green to deep gold hues. There are even Maine Coons that have odd-colored eyes. They are stunning. 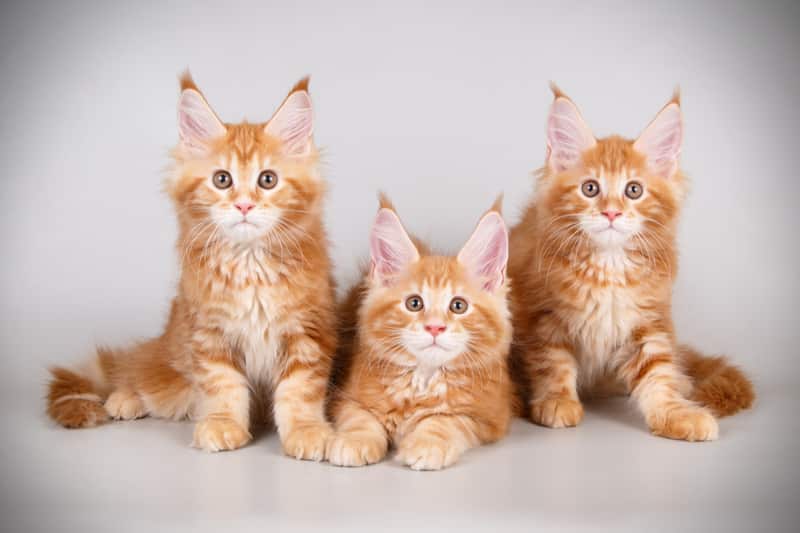 I may look like a wildcat but you just can’t judge a feline by its cover. I may look wild and grumpy even on my best days, but I’m actually very amiable and people-oriented.

So much so that it’s not uncommon to see me waiting by the door to greet my humans. Occasionally, I’ll even appoint myself as the official greeter of visitors to our household.

And despite my feral appearance, I am even friendly and patient with little humans and other pets and won’t resort to using my claws when harassed or when another pet is hogging the attention limelight.

I guess that’s ’cause as much as I love to be near my humans, I am just not the clingy type. Sure, I may follow you around to let you know that I’m there ready to lend a paw when it’s needed.

And of course, I’ll reciprocate your gestures of affection with cat hugs and cuddles, but I’m not really dependent on you for attention.

Actually, I’m not that fond of attention to begin with. It requires so much energy, after all, which I don’t have too much of. Taking it easy is the way I like to go most of the time so don’t expect me to get restless or anxious when left alone too long. I’ll simply find a corner to curl up in a relax ’til you’re ready to give me a belly rub.

You don’t even have to worry about me breaking your stuff while you’re gone since I prefer to remain close to the ground. High places don’t interest me much.

But that doesn’t mean I’ll be lying around all the time like a furniture with fur. I tend to be a vocal kitty and I won’t hesitate to use a lovely combination of soft trills, coos, chirps and meows when I want to make my presence known or perhaps share my opinion on anything that’s happening in the household.

I am also fairly intelligent and can easily master basic tricks like fetch. And unlike most cats, I won’t protest in the slightest when fitted with a leash and taken for a walk. I love the great outdoors, as my looks probably suggest.

What’s more interesting is unlike other water-scaredy-cats, I love taking baths and won’t hesitate to take quick dips when I have the chance. 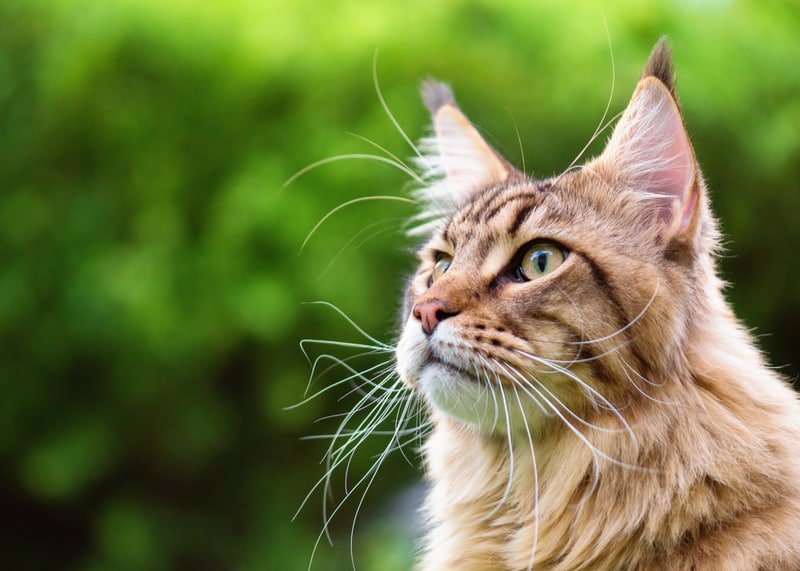 I am regarded as one of the easiest breeds to take care of because of my very sociable and tolerant nature. I am a cat that’s perfect for first time cat owners as well as older fanciers who are looking for a feline that’s not too demanding when it comes to attention.

The only thing I need the most from my human companions is a gesture or two of affection each day – a vigorous belly rub for a few minutes or a tight hug is enough to make me feel loved and cherished. I will also appreciate it if my humans allow me to follow them around the house, since even though I am not as vocal as other breeds, I like to have a say on most things that happen around the home.

My breed has long been shrouded in legend and mystery. Some historians say I am a descendant of the felines sent in advance by Marie Antoinette to Maine while she was planning her escape from France.

Others say that I am the result of the pairing of the long-haired cats that the British Captain Charles Coon brought along his shipping runs up and down the coasts of New England with the short-haired felines living in the ports of the area in the early 1800’s. Some say that my ancestors were stowaways from Viking ships that have escaped when the warriors stopped to restock with water and food.

There have even been strange accounts that say the Maine Coon is a breed produced when a raccoon and a cat inadvertently mated a long time ago. Gasp.

Now while the details of the history of my breed are a bit fuzzy, the very first mention of a Maine Coon cat in a published journal happened in 1861 when a short feature was made about a cat named Captain Jenks of the Horse Marines.

Not too long afterward, in 1895, a fancier’s show in Madison Square Garden granted the Best Cat award to a female Maine Coon named Cosie. Soon after, the Maine Coon was the fifth cat registered in the ranks of the Cat Fanciers Association (CFA) when it was established in 1908.

Although the popularity of the Maine Coon cat breed was subdued for a few decades when the Siamese and Persian arrived in the shores of North America, we regained our mainstream popularity in the 1960’s when the Maine Coon Breeders and Fanciers Association was founded.

Today, the Maine Coon remains one of the most well-loved breeds in and around the United States. We’ve even been named as the official state cat of Maine. And apart from being recognized by the CFA, the Maine Coon is also accepted by The International Cat Association (TICA).

Although I am a fairly resilient breed of feline, my human companions should make it a point to have me checked by a veterinarian at least every six months since I can still be prone to health problems like hypertrophic cardiomyopathy, polycystic kidney disease as well as hip dysplasia.

My guardians should also keep in mind to maintain my ideal weight through diet and exercise since I am vulnerable to obesity.