As you can probably guess by my Munchkin name, I am miniature cat. And not only am I tinier than other breeds, but my legs are extremely short and stout, much like the Dachschund or Corgi, except you know, in a cuter, cat way. 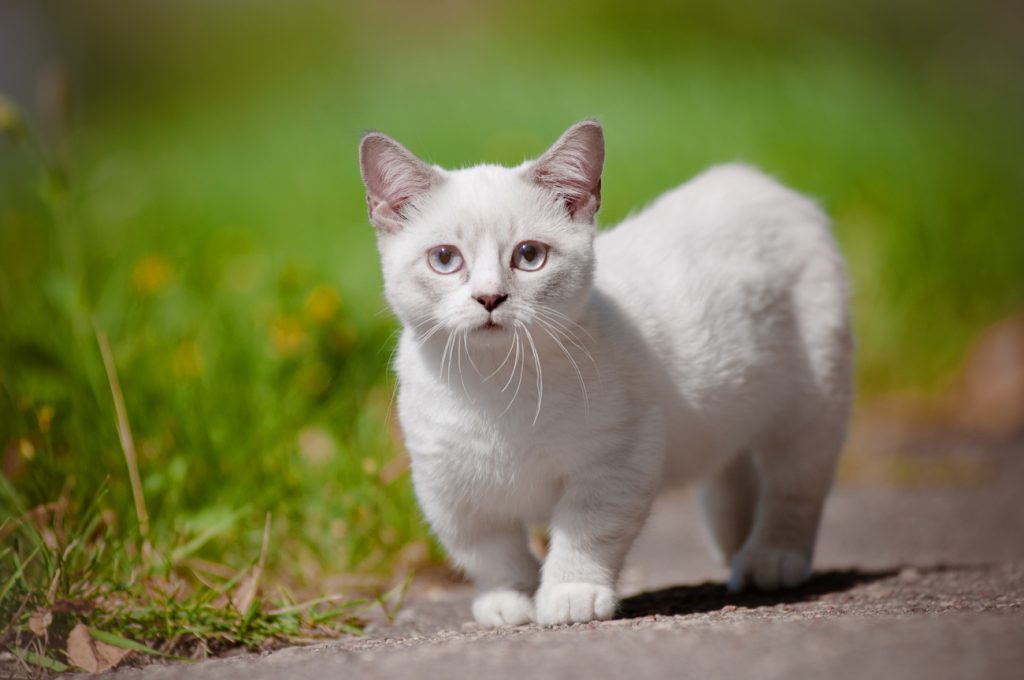 These little legs of mine may be short, but they are very capable and I can do anything those long-legged cats can. Except leap to the top of bookcases or cabinets.

But I don’t care for heights much anyway – the highest I’ll go is to your kitchen counters, but I prefer to take the scenic route.

In many ways, my petite legs allow me to do things longer-legged creatures can’t. 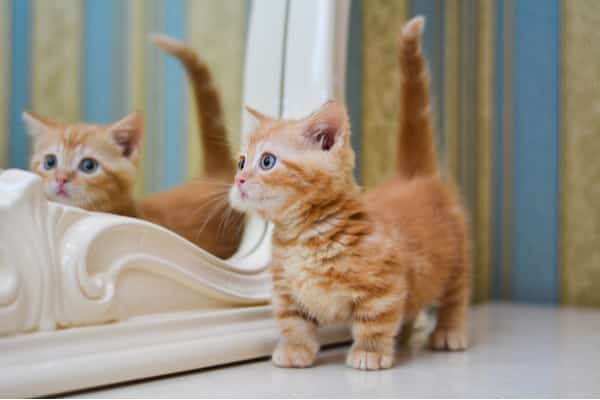 Watch me turn a corner at lightning speed. Yes, my cornering skills are exceptional thanks to my closer placement to the ground. Kind of like a racecar.

And on top of that, my economical legs are sturdily built and perfectly springy, which means I can burst into a quick dash and pounce with an unfathomable ferocity.

But apart from my small stature and distinctively short legs, there is a lot of variety in my breed.

My coat can come in just about any pattern or color and I can either sport a short or long coat depending on my pedigree. 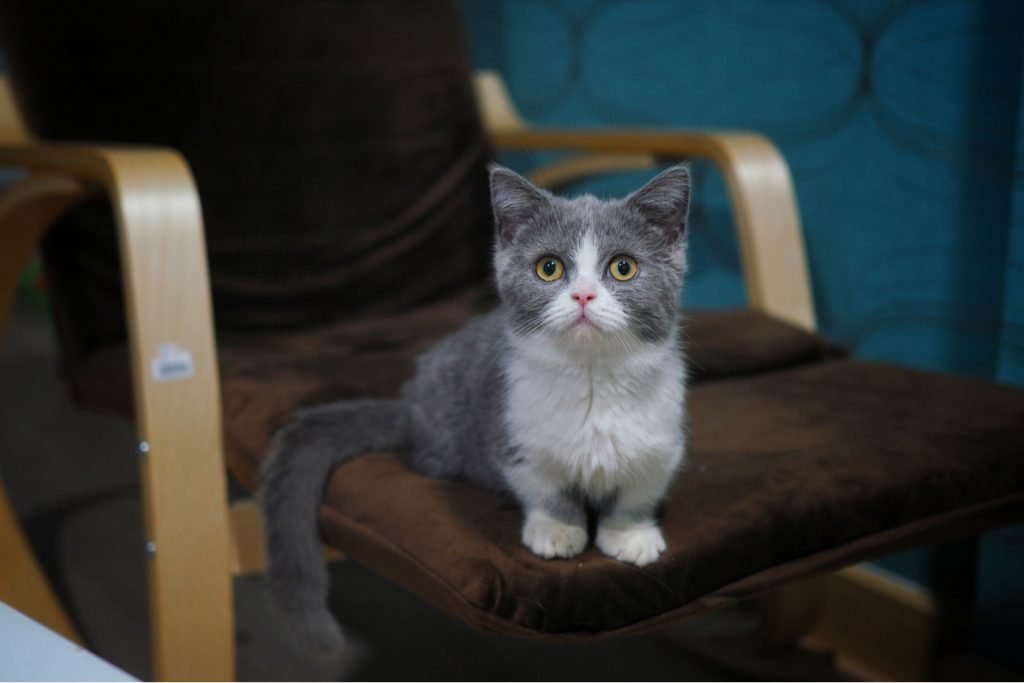 As for the rest of my body, my small frame is surprisingly muscular with a broad chest, well-developed shoulders and a stocky neck, which gives me a slightly cobby appearance, like a miniature Persian.

My tail is as adorable as the rest of me.

Oh, and as if my diminutive size didn’t make me cute enough, I am the proud owner of an endearingly roundish head complete with large, walnut-shaped eyes and topped with elfish, pointed ears.

The best part? My unique-teacup-sized looks guarantee I age well. Yes, I retain a perpetual kittenish charm for life.

I’ve had to endure a lot. Name calling and not-so-subtle euphemisms are a part of my everyday life. Dwarf. Low-riding feline. Vertically challenged. Even my name. Yes, I get it – I’m short. But Munchkin

But if you expect me to be bitter or have acquired a Napoleonic complex due to what I’ve been through, you are very much mistaken.

In fact, I remain as happy-go-lucky as the day I was born. And ‘though I may be small, my confidence and sense of self is bigger than most.

Especially when my diminutive build never gets in the way of my playful and active nature. I’ll run and chase anything that moves in and around the house and it doesn’t matter how small I am – you’ll be terrified when you see how ferociously I pounce!

Far from hampering my lifestyle, my short legs even help me navigate life better. Okay, maybe not life, per se, but they definitely help me negotiate even the most challenging twists and turns wherever I roam. 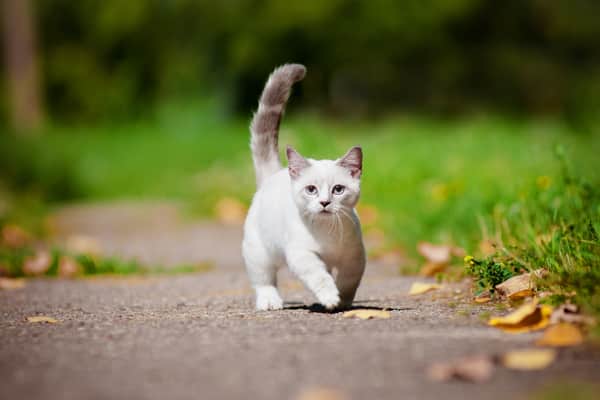 And it must be mentioned that my small stature in no way affects my social life. In fact, my longer-legged feline – or canine – friends have never discriminated against me for my size. They don’t seem to notice nor care. It’s really only humans that make remarks and give me funny looks. But no matter, I am super sociable and can win over anyone – human or otherwise.

It doesn’t take long for me to warm up to my surroundings either, making me one of the most adaptable felines in existence.

Unlike other breeds, I actually like to be handled and won’t protest at all when you pick me up – and trust me, you will want to pick me up. I’ll also never pass up the chance to get a vigorous belly rub and won’t ever hesitate to climb up your lap when I get in the mood for a cuddle.

What’s really interesting about me is my love for climbing. Sure, I may not have the ability to scale high points in the household like cabinets and windowsills as fast as my bigger counterparts, but I am known to find ways how to reach the summit slowly but surely.

Here’s one cool fact: you’ll know I am mapping out a course to the top when you see me sitting up on my hind legs. I usually do this when I am in deep thought or hatching a daring plan.

You see, I am an avid explorer at heart. That means you’ll often catch me checking out every nook and cranny in the home searching for new adventures and territories to be discovered.

I guess I should also mention that I’ve earned the nickname “Magpie” thanks to my penchant for shiny stuff. So I’ll probably keep myself pretty busy squirrelling away your silver cutlery, buttons, nail clippers, jewelry and other fun, shiny objects to play with at a later time.

Oh, you don’t like that? Well, you should probably keep your valuables under lock and key if you don’t want me to get my paws on them.

I love everyone. Which makes me virtually ideal for all cat fanciers. I’m very people-oriented and I don’t have a problem socializing with all sorts of humans – even the little ones. I’m super patient and won’t be fast with my claws even when handled too roughly. I simply prefer to scoot away to play somewhere else when this happens.

Now while I am an energetic cat, I m not hyperactive in any way at all. I am also not as demanding compared to other breeds when it comes to attention and playtime. I can be easily reared by newbies who are just starting out or older cat lovers looking for a low-maintenance companion feline.

However, I still require my daily dose of cuddling, belly rubs and caresses behind the ears so don’t forget, okay.

Although we’re a fairly new breed in the world of cat fancy, there is actually lots of historical documentation about felines sharing the same physical characteristics as early as the 1930’s.

One of the earliest accounts is a report by Dr. H. E. Williams-Jones, a British veterinarian, who shared that he had followed the growth and development of at least four generations of cats that exhibited this rather peculiar attribute.

Williams-Jones added that while their legs were extremely short, these cats still lived and functioned like their counterparts who had average-sized legs.

In the 1950’s, a cat gathered quite a following in the Soviet Union because it had short legs and also had the habit of taking it easy by sitting on its haunches. It was called the Stalingrad Kangaroo because of the odd stance it often took. And now let’s fast forward thirty years into the future.

The origin of the current Munchkin breed can be traced back in 1983 when Sandra Hochendel, a Louisiana music teacher, was walking down the street and spotted a bulldog pinning down two cats. She rescued them both and was surprised to see that the two felines were pregnant and ready to give birth anytime soon.

Now while discovering that the cats were heavy with kittens was already surprising enough, Hochendel was even more amazed when she looked at their legs. Unlike the legs of normal cats that were long and wiry, theirs were stubby and very short. She took them both home and named the cats Blueberry and Blackberry using the color of their coats as inspiration.

Hochendel gave Blueberry to a fellow cat fancier and kept Blackberry. When Blackberry gave birth to a litter, Hochendel gave one of her male kittens, who was named Toulouse, to her friend, Kay LaFrance. LaFrance allowed Toulouse to freely roam outside and he eventually sired a number of kittens over the following years.

Now while it isn’t unclear who between LaFrance and Hochendel called up the genetics committee of The International Cat Association’s (TICA) to verify if the Munchkin had the beginnings of a new breed, the registry’s experts concluded that our short legs are the result of a mutation of dominant genes that alter the growth cycle of the leg bones.

It was the TICA’s chairwoman, Dr. Solveig Pflueger, who gave the go signal to award the Munchkin our New Breed status in September 1994. I’m happy to report that our breed finally received our Championship status for TICA in May 2003.

Surprisingly, my short legs don’t make me vulnerable to spinal problems like in the case of the Manx, Cymric and Japanese Bobtail. I am fairly resilient to diseases and will remain hale and hearty if taken care of properly.

However, veterinarians share that not keeping an eye on my diet can easily lead to obesity, which can cause a few health issues in the long run. A weekly grooming is also a must for me, especially if my hair is long, since it can become matted if neglected.