Nebelung cats have intense eyes, pointed ears and a silvery blue coat. Their name is German and means “creature of the mist,” a reference to the cat’s shimmering silvery-blue coat, which gives the appearance of floating around the cats body.

The Nebelung is quieter than most breeds, initially shy but affectionate and exceptionally well-mannered. 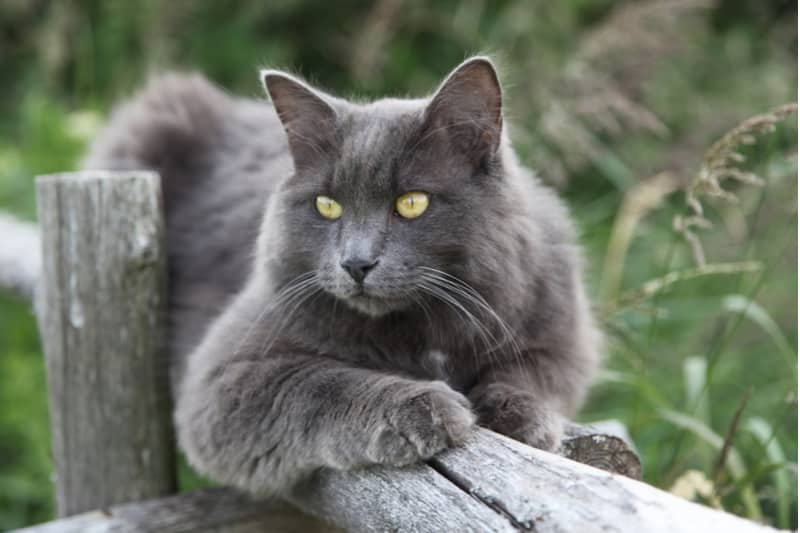 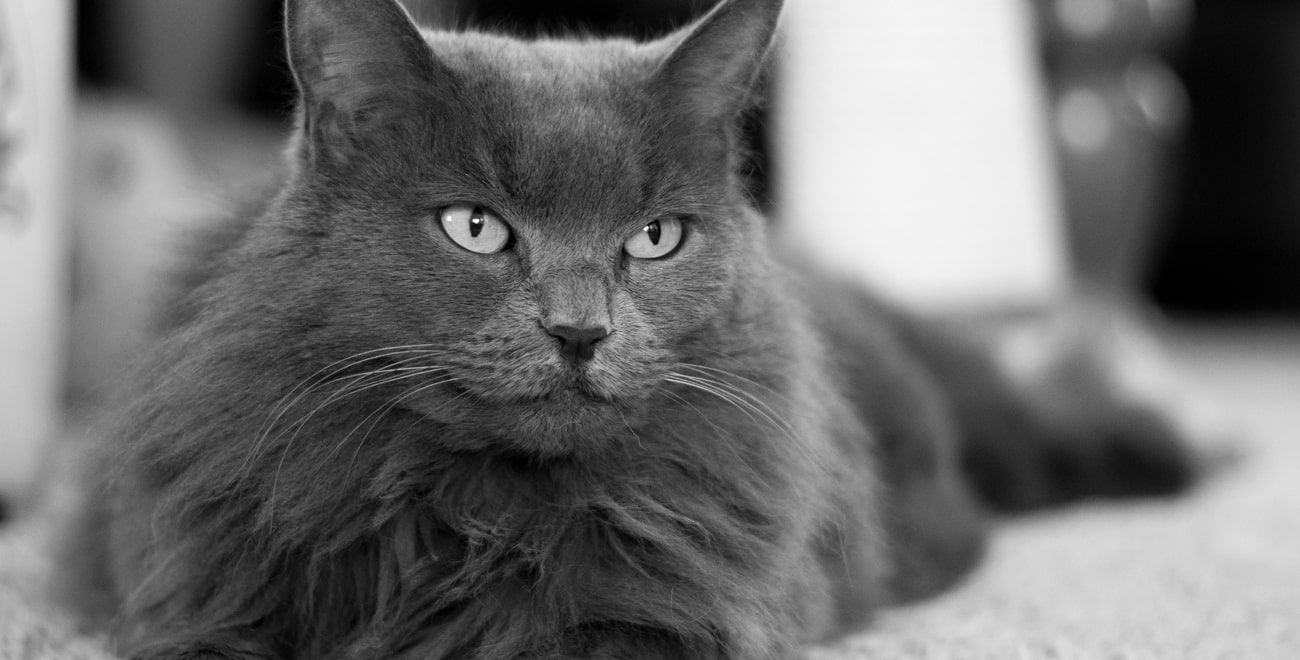 My beautiful long coat is the inspiration behind my name, Nebelung, which translates to ‘creature of the mist or fog’ in German, as well as what differentiates me from the Russian Blue, whom I have to thank for my brilliant green eyes and the unique silvery blue hue of my coat.

But my coat’s gorgeous length and fluffiness is all mine. Despite our other similarities, the Russian Blue has only a short, dense coat cropped close to his body while I’ve been blessed with an abundance of silken fluffiness complete with an ample undercoat. 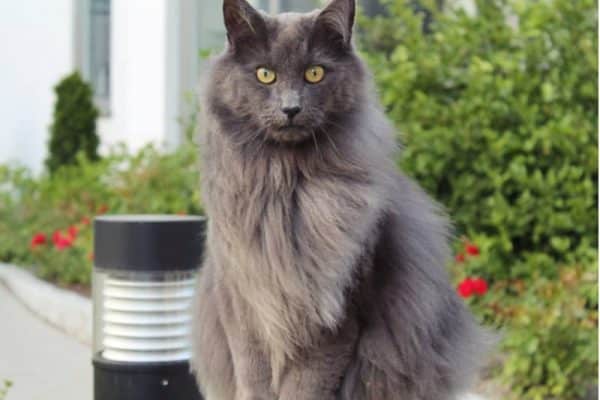 What’s not so great about such luscious fur is that it makes me look stockier than I actually am. But my frame is in no way cobby – I am perfectly medium-sized, thank you very much.

An interesting thing about my appearance is that my looks correspond purrfectly with my personality.

You see, my face is graced with serene green, walnut-shaped eyes and chiseled cheeks that lend me an expression of solemnity and a certain gravitas. Which, coincidentally, says a lot about my personality… 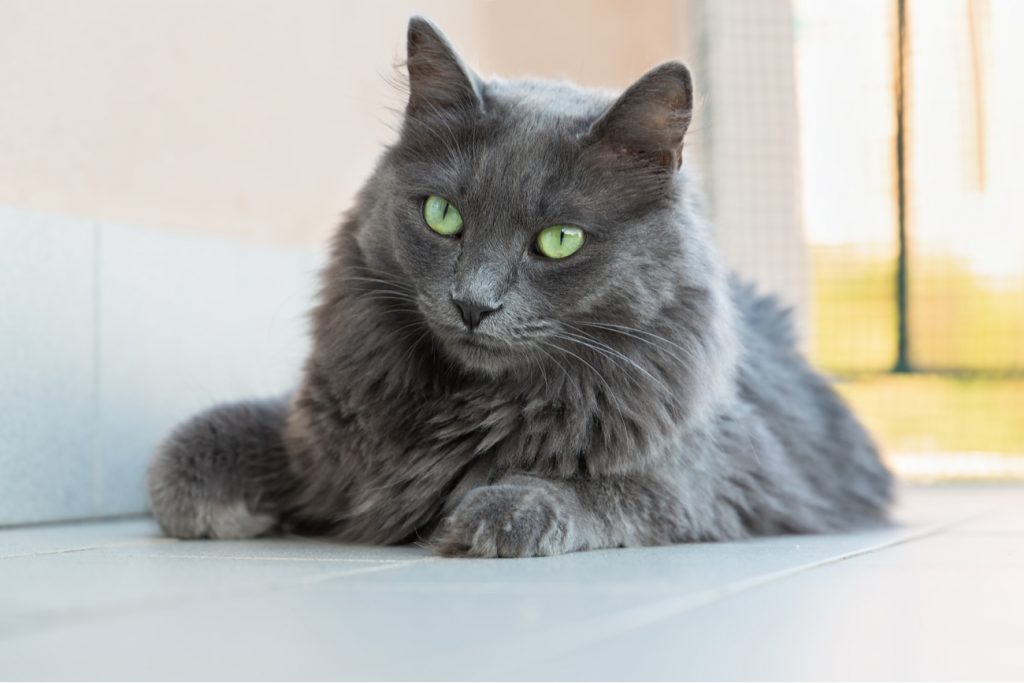 My dignified looks give my personality away. Yes, I am every bit as genteel and reserved as I appear.

Nebelung cats are not anti-social, mind you, I have no problem getting along with other beings. I’m just choosier than most and prefer to bond with those who are near and dear to me.

To those lucky individuals, I won’t think twice about showing constant gestures of my affection but don’t be surprised to see me slip out of sight when visitors drop by – I’ll be back as soon as the unfamiliar faces leave. 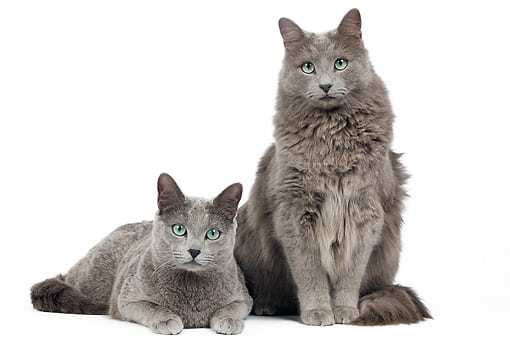 I feel the same about non-humans as well. ‘Though I can easily get along with other pets – especially other felines – I can take a long time to get used to dogs and other animals that tend to be a bit noisy.

Perhaps that’s because I am simply not fond of noise.

Silence truly is golden, as far as I’m concerned, and I practice what I preach by vocalizing only when something really needs to be done, like a food or water bowl refilled.

And even then, I prefer to communicate via soft trills and coos. Anything louder is just too gauche for my tastes. 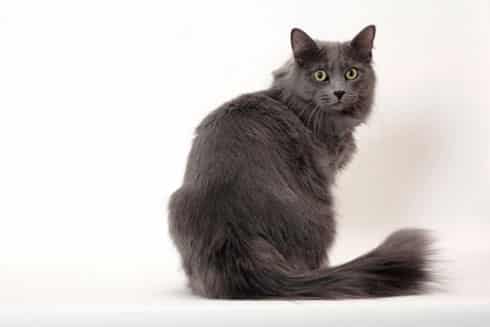 Don’t mistake my silence for inactivity, ‘though. I may not talk much, but Nebelungs are expressive in other ways. An avid pouncer and jumper, I channel much of my energy to perfecting my acrobatic skills, which encompass scaling high spots in the home like cabinets and shelves to entertain myself.

Oh, and no need to worry about things getting damaged during my performances. I have the litheness of a ballerina and the grace of a gazelle.

By now, I’m probably sounding like a very refined, low-maintenance sort of feline. And I am. But one thing you must keep in mind about me is that I am one of the most sensitive cats in all the feline world.

And although I may not crave for constant attention – and I certainly won’t deign to beg for it – I appreciate it when my gestures of love and warmth are properly reciprocated. So be loving with me, okay

You will regret it if you don’t. As genteel as I am, I will not hesitate to show my displeasure when ignored or made to feel I am not given the attention I deserve.

I am lovely company to have around – quiet, affectionate, and exceptionally well-mannered. But my reserved, sensitive nature also means that not every human is my particular cup of tea.

For starters, I am not fond of change and adapting to new homes or humans is not my forte. If you want to have me in your life, be prepared to provide me a stable home for the rest of my life and of course, get me early since introducing me to a new home when I’m older can be tricky.

Also, any human who is interested in having me around must be ready and willing to show me affection and promptly return my gestures of endearment. I’m sensitive and can be easily hurt if I feel my love is not being reciprocated.

Oh, and lastly – while I can get along with other pets, I have a strong preference for quiet company. And yes, that usually precludes pets of the canine variety. Of course, my first preference is that I am the only pet in the home. Hint hint.

During the 1980’s, a computer programmer and opera enthusiast by the name of Cora Cobb gave her son a black domestic shorthair as a present. This cat was named Elsa and didn’t have odd physical attributes or any traits that made her stand out among other felines. Little did Cobb know that Elsa would be the matriarch of a new breed of cat before long.

When Elsa became of age, she was paired with a Russian Blue and eventually gave birth to five kittens that displayed the usual short coat. However, there was one male kitten with a coat tad longer than the others. Cobb instantly fell in love with him and named him Siegfried. After a few months, Elsa produced another female kitten that exhibited the same unique feature. Cobb christened this one Brunhilde.

Putting two and two together, Cobb immediately set up a breeding program looking to produce kittens that flaunted this unique coat. Remarkably, Siegfried and Brunhilde became the very first Nebelung dam and sire in history. Their pairing finally came to fruition in May 1986 when Brunhilde gave birth to three kittens that all sported blue long-haired coats.

Cobb applied for the recognition of The International Cat Association (TICA) soon after and was advised by its genetics chairperson, Dr. Solveig Pflueger, to match our breed’s standard to the Russian Blue’s with only the coat length as the only major difference. The Nebelung was officially accepted by TICA in September 1987.

Although the Nebelung was now a recognized breed, Cobb soon found out that she had a very tricky hurdle to ensure the growth of the Nebelung’s fledgling numbers: Russian Blue fanciers in and around the United States were not that open to crossbreeding their cats to the newly recognized breed.

Fortunately, this issue was resolved in 1988 when the owner of Supreme Grand Champion Vladimir of Castlecats presented her Russian Blue to mate with one of the female offspring of Brunhilde’s. This allowed the rookie breed to grow in size in the following months.

The Nebelung cat breed is generally a hardy cat and doesn’t require any type of special attention to keep me them in shape. Some folks are under the impression that the Nebelung is hypoallergenic but I can confirm the breed is non hypoallergenic.

The only thing is – cat enthusiasts looking to have me as a pet should keep in mind to give my coat a meticulous grooming at least once a week to prevent it from getting kinky and matted.